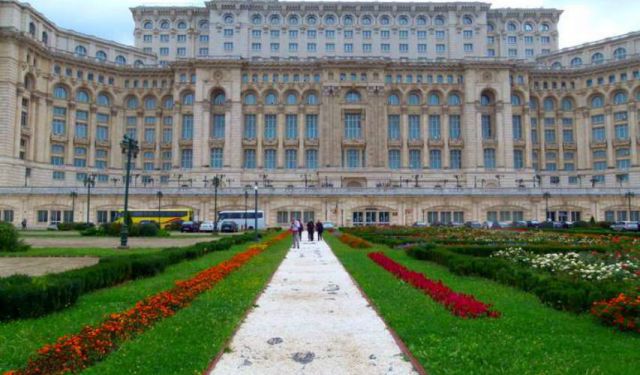 Almost two months into our big European cycling adventure we found ourselves in the Romanian capital of Bucharest after cheating the mountains again and catching the train from Brasov (Transylvania).

Our *Airbnb host Marco had cycled down to the railway station in Bucharest and greeted us on the end of the platform. The streets around the station are small and busy, the footpaths crowded with shoppers. Marco led us on a merry chase along one-way streets past some pretty amazing architecture. It was tricky trying to keep an eye on him and take in the city at the same time.

When we reach our apartment, about a kilometer north of the Old Town, Marco informed us we were on the sixth floor – not what we understood from his advert. The stairs leading up were arranged in a very tight, narrow spiral, making even walking up with your elbows out a challenge. Still, there was a lift to take our gear up. Not a problem, surely? Hmmm..The reality was a little bit trickier. It was the smallest, dodgiest lift I’ve ever seen. More like an ancient, open-sided dumb waiter than a lift. We had to stand our bikes up inside and hang on for grim death as the lift clunked its crazy way up six long torturous flights. It would have to be our most difficult introduction to an apartment we’ve ever had. ...... (follow the instructions below for accessing the rest of this article).
This article is featured in the app "GPSmyCity: Walks in 1K+ Cities" on iTunes App Store and Google Play. You can download the app to your mobile device to read the article offline and create a self-guided walking tour to visit the attractions featured in this article. The app turns your mobile device into a personal tour guide and it works offline, so no data plan is needed when traveling abroad.