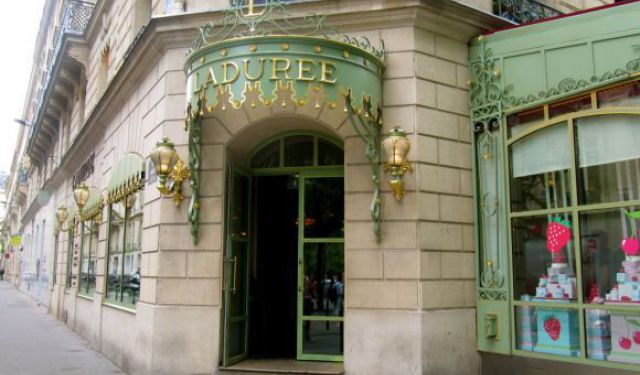 If you have a sweet tooth and it wishes to "eat your way" through Paris, this guide will show you how! Featured here are some of the most famous and prominent dessert spots in the French capital, where you can grab something sweet to enjoy. With 20 listed recommendations, you should be able to find something nearby, from pastries to chocolates to ice cream to macaroons, whenever your passion kicks in. There is something to satisfy every sweet desire! Bon Appétit!

History: Founded in 1862, Laduree is known as the inventor of the double decker macaroon, the two sides sandwiched together with a creamy ganache filling. 15,000 macarons are sold daily which makes Laduree one of the most famous macaron makers in the world today. The founder, Louis-Ernest Ladurée, was a talented writer. He produced plays, poetry, novels, essays, historical and scientific works, more than 20,000 letters and more than 2,000 books and pamphlets. He strongly supported social reform and wrote to promote those causes. In 1862 he founded the bakery, it was then burned down in the Paris commune uprising of 1871, then rebuilt. It wasn’t until 1930, when it became a more well known name, that the grandson of Louis-Ernest came up with the double decker macaron. In the late 1800's Laduree provided the first "tea room" for women (who at the time were not allowed in cafés), thus allowing women to mingle outside of their homes. Their restaurant is now very good as well, if you want a sit down meal. Look for other Ladurée stores in Paris, as well as Monaco, Switzerland, Japan, Italy, Lebanon, Turkey, UAE, Saudi Arabia, Luxembourg, Kuwait, and Ireland. Highlights: Their Macaroons. I love the Vanille, Citron, and Praline. ...... (follow the instructions below for accessing the rest of this article).
This article is featured in the app "GPSmyCity: Walks in 1K+ Cities" on iTunes App Store and Google Play. You can download the app to your mobile device to read the article offline and create a self-guided walking tour to visit the attractions featured in this article. The app turns your mobile device into a personal tour guide and it works offline, so no data plan is needed when traveling abroad.