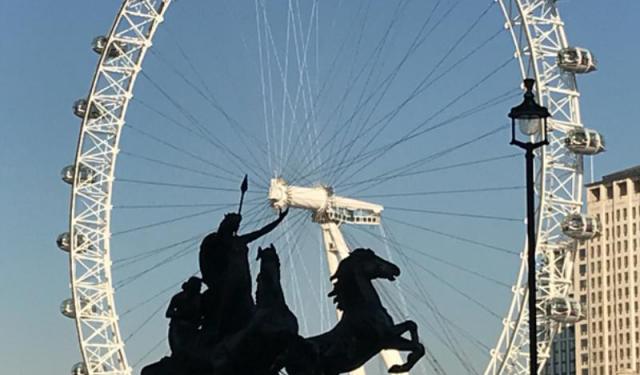 At the end of Westminster Bridge, just across from Big Ben, stands a sculpture of a woman driving a chariot. It’s called Boadicea and Her Daughters. As an American I had never heard of this woman, and was curious. It turns out, she was an early British Queen turned folk hero that all British children learn about in school. Nowadays her name is spelled Boudica (pronounced something like Boo’ di ka), and she is famous for taking on the Roman army in 60 AD. – and almost winning.

The Roman historian, Cassius Dio, described Boudica like this: “In stature she was very tall, in appearance most terrifying, in the glance of her eye most fierce, and her voice was harsh; a great mass of the tawniest hair fell to her hips; around her neck was a large golden necklace…”

But before Boudica went on her rampage, the tall red-headed Queen probably wasn’t so fierce. Her life was pretty good. She was married to Prasutagus, King of the Iceni tribe, and they had two young daughters.  ...... (follow the instructions below for accessing the rest of this article).
This article is featured in the app "GPSmyCity: Walks in 1K+ Cities" on iTunes App Store and Google Play. You can download the app to your mobile device to read the article offline and create a self-guided walking tour to visit the attractions featured in this article. The app turns your mobile device into a personal tour guide and it works offline, so no data plan is needed when traveling abroad.