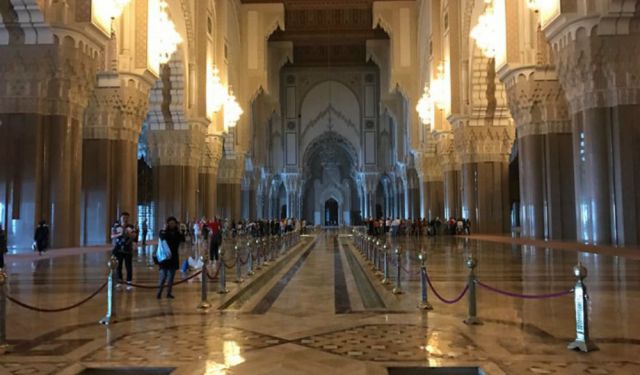 Casablanca, located on Morocco’s Atlantic coast, is the largest city in Morocco. Serving as Morocco’s chief port, it is one of the largest financial centers on the African continent. I didn’t know much about Casablanca before arriving, and had only associated it with the romantic movie “Casablanca”. Boy was I surprised by this city of over five million people!

The Movenpick Casablanca Hotel is a five-star hotel located between the Habous area and the corniche, where we spent most of our tour. The hotel has a great rooftop bar and pool!

Now that we have been in Morocco a week, we have learned a few Arabic/Berber words. I think the ones we’ve heard the most are “Marhaba” – “Hello” and “Yallah” – “Let’s Go”. We were ready to go today. It was time for a tour of Casablanca. We started the day at Hassan II Mosque, which is only one of two mosques in Morocco that non-muslims are allowed to enter. Tourists may visit the mosque at 9, 10, 11 and 2.

The mosque, the third largest in the world, was publicly funded, designed by a French architect and took 35,000 Moroccans to construct over seven years between 1987 and 1993. Its minaret is 650 ft high. The main hall holds 25,000 people; 20,000 men on the main floor and 5,000 women in the upstairs mezzanine. I would have never guessed the intricately decorated 200 ft high ceiling opens. The mosque, located partly on land and partly on water, has a retractable roof! ...... (follow the instructions below for accessing the rest of this article).
This article is featured in the app "GPSmyCity: Walks in 1K+ Cities" on iTunes App Store and Google Play. You can download the app to your mobile device to read the article offline and create a self-guided walking tour to visit the attractions featured in this article. The app turns your mobile device into a personal tour guide and it works offline, so no data plan is needed when traveling abroad.