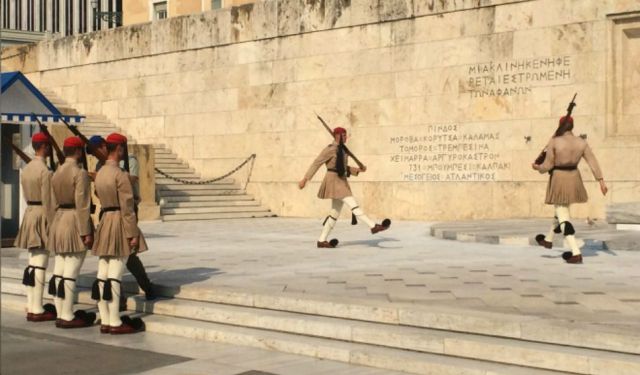 For many people Athens is a convenient gateway to the Greek Islands. While that was also part of my plan, I was glad to have spent a few days in the city before embarking on my island hopping itinerary. As one of the oldest cities in the world, so much of what we know today can be traced back to ancient Athens – democracy, philosophy, mathematics, architecture, theatre and even the 26-mile marathon. The city is literally an open-air museum, with layer upon layer of culture and history everywhere you turn. The best way to experience Athens is to let yourself get lost in this archaeological forest, where instead of trees you’ll find remnants of columns, capitals and cobblestones. Since my time in Athens was short, I wanted to maximize my experience to get a good sampling of the city, still leaving many reasons to return (this by no means is an exhaustive list of sites). Here’s a snapshot of one “classical” day in Athens:

They say breakfast is the most important meal for a reason, so we began our day with a small feast that included traditional Greek yogurt with honey, fresh fruit and pastries at the Central Hotel. Our first destination was Acropolis Hill and I couldn’t contain my excitement after seeing it lit up from the adjacent Mars Hill the night before. We arrived early to beat the heat and the crowds (both of which soared faster than you could say Hades) and headed straight to the Parthenon, the iconic temple dedicated to the city’s patroness Athena. While much of one side was shrouded with scaffolding the ruins in repair were nevertheless impressive. Aside from the sweltering heat, it was a surreal moment to be standing face to face with one of the most important structures of Western civilization. As we rounded each side of the Parthenon, walking carefully over the slick marble from centuries for wear and tear, I was glad to have visited the Acropolis Museum the previous afternoon to help fill in the blanks (literally) of what the Parthenon looked like at the peak of its glory. Equally as impressive was the Erechtheion with its beautiful maiden-column porch (5 of the 6 original statues are also on display at the museum) and the nearby olive tree that was planted in honor of Athena’s first gift to the city. ...... (follow the instructions below for accessing the rest of this article).
This article is featured in the app "GPSmyCity: Walks in 1K+ Cities" on iTunes App Store and Google Play. You can download the app to your mobile device to read the article offline and create a self-guided walking tour to visit the attractions featured in this article. The app turns your mobile device into a personal tour guide and it works offline, so no data plan is needed when traveling abroad.