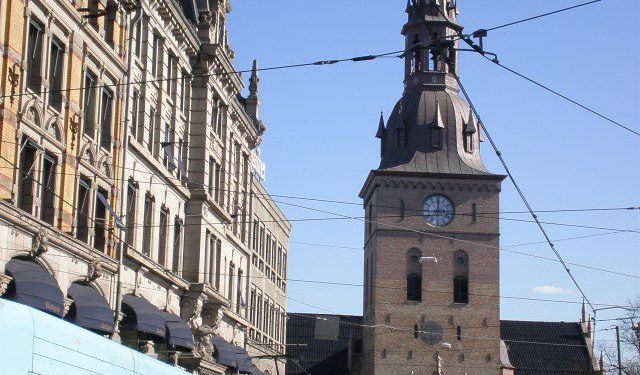 Have you ever been to Scandinavia? The trip to Norway’s capital was my first encounter with cool Scandinavia. My husband and I spent a weekend in Oslo in April last year. I didn’t have any preconceptions of Oslo which is probably one of the reasons that I felt so relaxed there. Oslo is actually in a fjord and surrounded by hills & forest. There’s even a ski jump tower in the city area (Holmenkollen National Ski Arena with museum and jump tower). I mean where can you ski and then go to the opera in the same day?

Why did we go to Oslo in the first place? Sometimes we go on a trip because we particularly want to visit that town/country and sometimes, which was the case this time, we go somewhere because we found a cheap plane ticket and/or budget accommodation. So we landed on a Friday afternoon and had an early morning flight back on Monday which gave us just enough time to explore Oslo. Sadly, there wasn’t enough time to do anything else like visit the fjords.

We arrived on a crisp sunny April day, just a week before Easter celebrations. First impressions of Norway from the plane (sea&islands) were very promising as was the landscape just outside the airport (forest). But then our airport shuttle arrived and I burst into laughter. I have never ever been driven in such an old dilapidated van/airport transfer.We were dropped off at the main bus station and continued on foot to our hotel which was 20 mins from the aforementioned station. It was a leisurely stroll around the center since our hotel was just around the corner of the main street Karl Johans Gate and the Royal Palace. Yes, Norway’s got a royal family but we didn’t see them. We’ve also came across the stout and sombre Cathedral on our way to the hotel. It’s a bit odd that there are shops and cafes just behind the cathedral in the so-called Bazaar halls. ...... (follow the instructions below for accessing the rest of this article).
This article is featured in the app "GPSmyCity: Walks in 1K+ Cities" on iTunes App Store and Google Play. You can download the app to your mobile device to read the article offline and create a self-guided walking tour to visit the attractions featured in this article. The app turns your mobile device into a personal tour guide and it works offline, so no data plan is needed when traveling abroad.