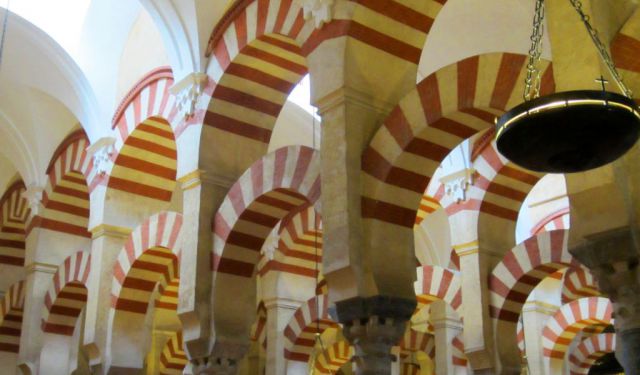 Cordoba in 4 Hours, Cordoba, Spain (B)

One of my favorite things about Madrid is the tapas scene. Another is its central location, which makes the Spanish capital a great home base for taking daytrips other cities like Córdoba. In less than 2 hours on the AVE high-speed train, we had arrived and it was love at first sight. Córdoba is like an onion with many layers of history, the deeper you dig, the more you will uncover in this fascinating city. At first glance, it’s a playground of palm trees, mosques and whitewashed buildings, all enclosed within the remains of the old defensive walls. Yet at one point Córdoba was one of the largest and most advanced cities in the world, serving as a great cultural, political, financial and economic center. It’s no wonder that the entire historic center – a fusion of Roman, Moorish and Spanish influence – is a UNESCO World Heritage Site. So with a (too short) 4-hour stopover before continuing onto Sevilla, we hit the ground running and were not disappointed.

Leaving the train station, we walked down Avenida de América and turned into the gardens that run along Paseo de la Victoria. Now surrounded by palm trees, orange trees and fountains with ducks, it felt as if we had journeyed further away from Madrid than we actually did. After a leisurely stroll that loosely traced the outline of the green, we turned off and walked along the edge of the city’s old Roman Walls, which date back to 206 BC. The stone walls provided much-appreciated shade from the heat of the morning sun so we continued along the stone path below, dotted with greenery and a stream of flowing water, until we reached our first destination, the Alcázar of Córdoba. Arabic for “palace” the Alcázar began as fortress in medieval times, expanding over the years to a larger compound with extensive baths, gardens and one of the largest libraries in the West. It also served as the primary residence of King Ferdinand and Queen Isabella during the height of Córdoba, and was the site where the monarchs met Christopher Columbus before his first voyage to the Americas. A statue memorializing this meeting is the centerpiece of the Alcázar’s beautiful gardens, while the interior of the palace offers mosaics, ramparts and a tower with a great view of the city. There’s also a free app to help guide you through the complex. ...... (follow the instructions below for accessing the rest of this article).
This article is featured in the app "GPSmyCity: Walks in 1K+ Cities" on iTunes App Store and Google Play. You can download the app to your mobile device to read the article offline and create a self-guided walking tour to visit the attractions featured in this article. The app turns your mobile device into a personal tour guide and it works offline, so no data plan is needed when traveling abroad.