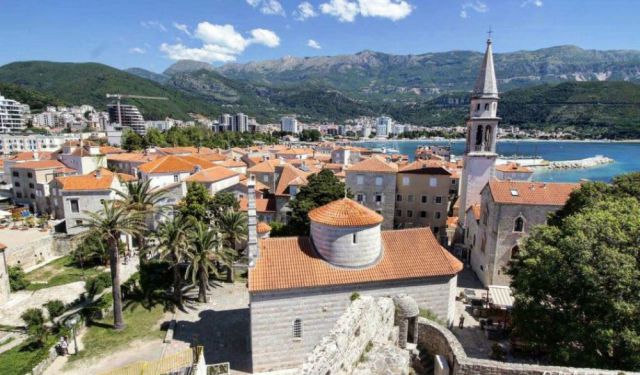 Budva (Будва) might seriously be my spiritual home. As one of the last Venetian outposts along the Adriatic, this fortified Stari Grad (Old Town) is simply oozing with charisma, backed by rugged mountains and vibrant turquoise waters. Budva is easily one of the most beautiful settlements and popular destinations in Montenegro. I could have stayed here forever.

Legend has it that Budva was founded by Cadmus, the prince of Phoenicia. While looking for his sister Europa who had been kidnapped by Zeus, he was soon in the company of the Greeks. Over time he would marry Harmonia, the daughter of Ares, but received a cursed necklace at their wedding. They soon found themselves exiled and made their way to the Adriatic coast with an ox-drawn cart. Upon arrival at the most beautiful place on the Adriatic, they named it Budva after their ox who led them to a new life.

Later, Cadmus defeated a sacred dragon, he was still cursed and wished he was a serpent, too, since the gods seemed to be so devoted to the dragon. His words were taken quite literally and before he knew it, he was growing scales. Wanting to stay with Cadmus, Harmonia begged the Gods to be with him. As the legend continues, they still live among the bushes in Budva. Supposedly, he also founded Ohrid in Macedonia. ...... (follow the instructions below for accessing the rest of this article).
This article is featured in the app "GPSmyCity: Walks in 1K+ Cities" on iTunes App Store and Google Play. You can download the app to your mobile device to read the article offline and create a self-guided walking tour to visit the attractions featured in this article. The app turns your mobile device into a personal tour guide and it works offline, so no data plan is needed when traveling abroad.