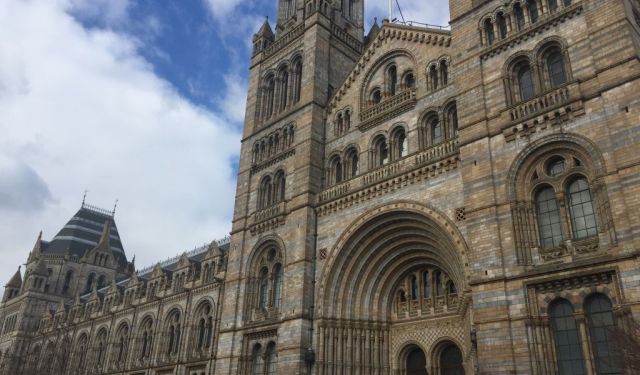 Discovering Dinosaurs at the Natural History Museum, London, England (B)

The long queues I always seem to spy whenever I go past London’s Natural History Museum in Kensington have put me off going for a long time. Seeing people standing in the freezing cold waiting to go in has never appealed and the last time I was going to go with Mrs T, I was tempted away by the V&A.

But, with my daughter now a fully-fledged dinosaur fan, we headed there for a family trip on Mother’s day – pre-warning my husband (not known for his patience) about the likely queue situation.

There was indeed a line of people waiting outside the famous Victorian building, snaking around the front of the striking terracotta facade. After enquiring with someone who looked official, we were informed it would only be a half an hour wait – which didn’t seem too bad. In fact, it was more like 20 minutes and with the promise of dinosaurs for our daughter, she seemed happy watching the other children in the queue. It helped that the sun was shining.

Once inside the Natural History Museum, we immediately went to check out the iconic diplodocus in the main hall. I have to admit that after seeing Sue the T-Rex at the Field Museum in Chicago and a real diplodocus skeleton at Dubai Mall, the 70ft replica, named ‘Dippy’, although impressive, didn’t have quite the same impact on me as it had when I last it. But Mrs T was suitably impressed and I am glad I viewed it one more time before it is replaced with the bones of a Blue Whale next year – after 30 years taking pride of place in the Hintze Hall. ...... (follow the instructions below for accessing the rest of this article).
This article is featured in the app "GPSmyCity: Walks in 1K+ Cities" on iTunes App Store and Google Play. You can download the app to your mobile device to read the article offline and create a self-guided walking tour to visit the attractions featured in this article. The app turns your mobile device into a personal tour guide and it works offline, so no data plan is needed when traveling abroad.