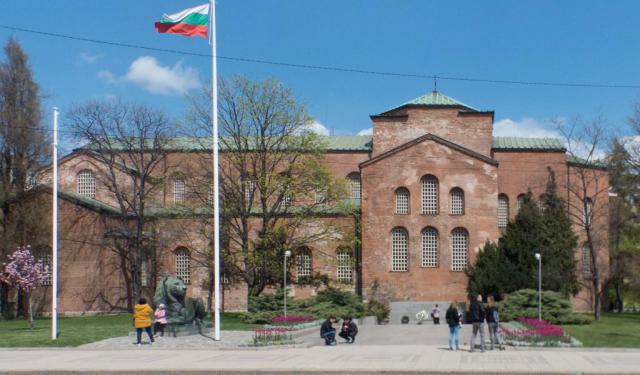 Hidden Art Galleries: The Churches of Sofia, Sofia, Bulgaria (B)

We are accustomed to thinking of churches as great works of architecture. But many of them also have magnificent interiors. I was surprised at how many of the churches of Sofia were like mini-art galleries, packed with frescoes and other artworks, a reflection of the city’s Byzantine heritage. I’ve listed some of the most important below, but there are many more – if you pass a church in Sofia, it is worth stopping to look inside!

Saint Nedelya Church (also known as St Kyriaki Cathedral Church) is the building you see ahead of you as you approach the town centre from Vitosha Boulevard. The original building dates from the 10th century, but it suffered substantial earthquake damage in 1858. It was rebuilt, but was further damaged by a politically-motivated bomb attack in 1925.

What you see today is mostly from the 20th century. The church is built in a neo-Byzantine style, with a massive 31m dome. The magnificent interior is full of icons and Byzantine influenced wall paintings. ...... (follow the instructions below for accessing the rest of this article).
This article is featured in the app "GPSmyCity: Walks in 1K+ Cities" on iTunes App Store and Google Play. You can download the app to your mobile device to read the article offline and create a self-guided walking tour to visit the attractions featured in this article. The app turns your mobile device into a personal tour guide and it works offline, so no data plan is needed when traveling abroad.