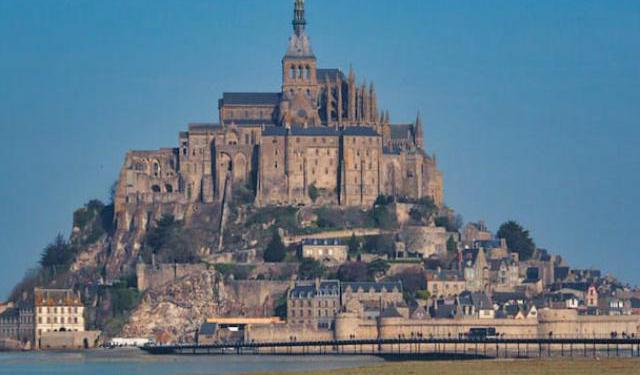 How to Spend the Perfect Day at Le Mont Saint-Michel, Mont Saint Michel, France (B)

Visited by more than 3 million people per year, Le Mont Saint-Michel is one of France’s top tourist attractions. And it’s not hard to see why when you consider its history and spectacular location. So, with a forecast of warm, sunny weather on this particular mid-March day, we took a day trip there to find out what all the fuss was about.

Does it deserve its reputation as one of France’s must-see attractions? Can you visit it on a budget? And why on earth would anyone want to build an enormous monastery complex on a lonely slab of granite just off the coast of Normandy?

Its origins can be traced back to 708 when the Bishop of Avranches built a sanctuary on the outcrop in honour of the Archangel, St Michael. Over the next few hundred years, Benedictine monks settled in the Abbey and a village started to take shape below its walls. And, by the 14th Century the monastery, abbey and church were completed as they appear today.

Located approximately 600 metres offshore, it was accessible to the mainland during low tide but completely cut off at high tide. In fact, the bay lays claim to having the highest tides in Europe. So, perfect for pilgrims to make their peaceful visits but a major headache for any would-be assailants trying to launch an attack. And, so impregnable was the Mont that it survived every attempt by the pesky British to take it during the Hundred Years War. As a result, it became a symbol of national identity for the French. ...... (follow the instructions below for accessing the rest of this article).
This article is featured in the app "GPSmyCity: Walks in 1K+ Cities" on iTunes App Store and Google Play. You can download the app to your mobile device to read the article offline and create a self-guided walking tour to visit the attractions featured in this article. The app turns your mobile device into a personal tour guide and it works offline, so no data plan is needed when traveling abroad.