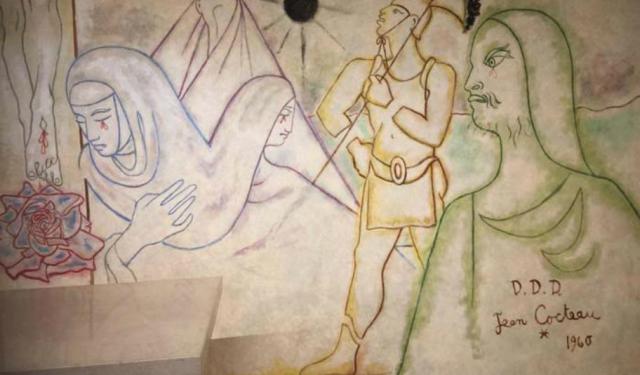 I’ve had the pleasure of visiting several sites decorated by Jean Cocteau on the French Riviera, but I was surprised to find his work in the center of London. Just off Leicester Square (pronounced Lester Square) there is a church with a chapel decorated with Cocteau’s trademark drawings.

At first sight, it’s not obvious that this a church. It’s tucked between two buildings and isn’t a traditional church style. The unassuming entry leads to a round interior. This is because the original structure, built in 1793, was designed to display panoramas. It was popular entertainment at that time to visit 360° painted panoramas of European capitals or historic events. The display would be repainted regularly and people would come to experience “theatre in the round” before film or photography were invented.

In 1865, the panorama was converted into a French Catholic Church, Notre Dame de France, to serve the large French population in the area. The building was damaged by bombing during the war, but in 1941 it was repaired and resumed its religious function. ...... (follow the instructions below for accessing the rest of this article).
This article is featured in the app "GPSmyCity: Walks in 1K+ Cities" on iTunes App Store and Google Play. You can download the app to your mobile device to read the article offline and create a self-guided walking tour to visit the attractions featured in this article. The app turns your mobile device into a personal tour guide and it works offline, so no data plan is needed when traveling abroad.