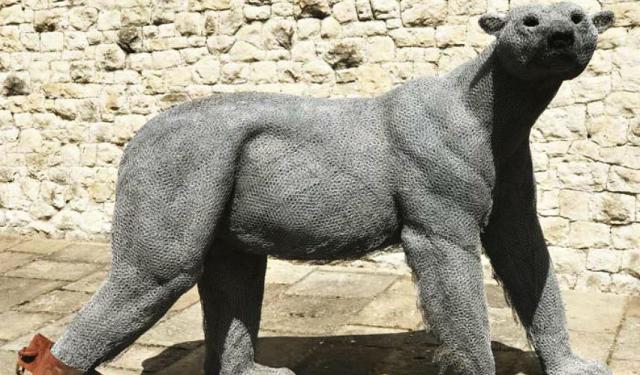 Lions, Tigers, and Bears in the Tower of London!, London, England (B)

In the middle of modern London stands the grand eleventh-century castle built by William the Conqueror called the Tower of London. It’s best known as a secure home for the crown jewels or as an ancient prison for those who incurred the king’s wrath. But treasures and traitors weren’t the only things locked behind those fifteen-foot thick stone walls. For about 600 years the Tower was home to the Royal Menagerie: Lions, tigers, bears, kangaroos, and many other animals lived there.

Kings and queens have been giving each other exotic animals for ages. After all, what better way to make an impression than to send someone an elephant? These animal gifts began arriving in England in the eleventh century. But unlike the gift of flowers, the animals couldn’t just be admired for a time and then discarded: They had to be housed and fed. The inescapable castle seemed like the perfect place to keep the growing Royal Menagerie.

The beasts that arrived were strange, foreign, and unlike any animals the British were used to. No one really knew, or bothered to find out, how to take care of them. After enduring a long sea journey, they were confined to cramped cages in the tower and often fed an unsuitable diet. ...... (follow the instructions below for accessing the rest of this article).
This article is featured in the app "GPSmyCity: Walks in 1K+ Cities" on iTunes App Store and Google Play. You can download the app to your mobile device to read the article offline and create a self-guided walking tour to visit the attractions featured in this article. The app turns your mobile device into a personal tour guide and it works offline, so no data plan is needed when traveling abroad.