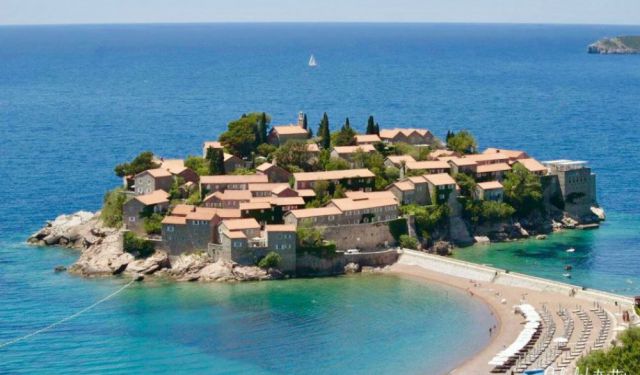 Ever dreamed of rubbing elbows with the rich and famous? Ever dreamed of laying on a private beach completely to yourself, without any screaming children, obnoxious tourists or loud cars? Ya, me too! Does a place even exist?

Located along the Budva Riveria just 20 minutes from Budva, stretching out into the Adriatic Sea, is the unbelievably stunning, “pinch me, is this even for real?” islet known as Sveti Stefan. Incredibly popular between the 1960s and 80s as a playground for the elite and people like Doris Day and Princess Margaret, even Oprah have stayed here. Today, it still has that ideal peaceful tranquility we all dream of.

Previously an island, the population began to dwindle and by 1954 there were only 20 people still living there. So, it was connected to the mainland and became a hotel. It would later be renovated and turned into a 5-star luxury hotel owned by Aman Resorts in 2007 and is the jewel of the Budva Riveria.

The tiny islet’s history dates as far back to the 15th Century, which naturally comes with a legend as to how it came to be. As the story goes, the Ottoman Turks were trying to expand their reach throughout the Adriatic Sea. They had planned to attack Kotor, but locals from the area banded together to help their neighbors. As history would have it, they won, ran the Turks off and took all the goods. The locals decided to build a fortress on a little islet for each of the 12 local tribes, which included a church dedicated to St. Stephan who was the town’s protector, hence the name. ...... (follow the instructions below for accessing the rest of this article).
This article is featured in the app "GPSmyCity: Walks in 1K+ Cities" on iTunes App Store and Google Play. You can download the app to your mobile device to read the article offline and create a self-guided walking tour to visit the attractions featured in this article. The app turns your mobile device into a personal tour guide and it works offline, so no data plan is needed when traveling abroad.