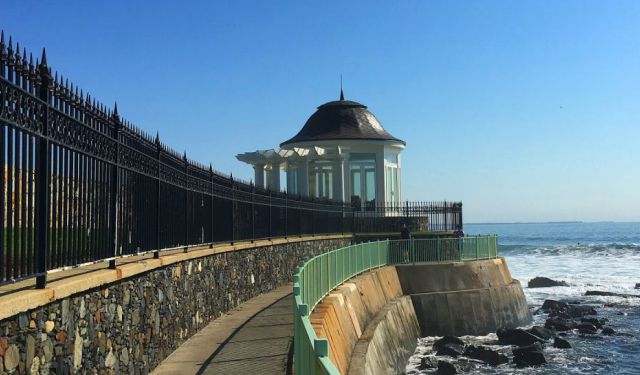 After an overnight passage of 148 nautical miles we arrived in Newport, Rhode Island. The above is looking toward Clairborne Pell Newport Bridge from the Crown Princes anchored in Narragansett Bay.

In a very abbreviated history, the Narragansett people were the first to inhabit this area of Newport, Rhode Island. Later in 1639, a small group of Puritans, who had been banished from the Massachusetts Bay Colony for their religious views settled here. Than after the Revolutionary War, wealthy industrialists from New York City and Philadelphia built summer homes along the coast of Newport.

After purusing all of the possible tours offered by Princess Cruise, we decided to formulate our own walking tour using Google Maps.

It consisted of two parts, the Washington Square Historic District and the Cliff Walk. Approximately 7 miles of walking. From the harbor we walked down Long Wharf Mall through Washington Square.

Two colonial buildings sit at either end of the square, the Brick Market (now home of the Museum of Newport History) built in 1772 and  ...... (follow the instructions below for accessing the rest of this article).
This article is featured in the app "GPSmyCity: Walks in 1K+ Cities" on iTunes App Store and Google Play. You can download the app to your mobile device to read the article offline and create a self-guided walking tour to visit the attractions featured in this article. The app turns your mobile device into a personal tour guide and it works offline, so no data plan is needed when traveling abroad.