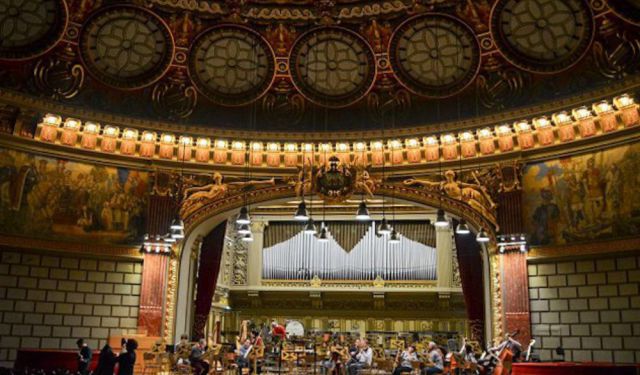 Must See in Bucharest: Romanian Athenaeum, Bucharest, Romania (B)

One of my favorite things about travel is finding unexpected treasures. And the Romanian Athenaeum in Bucharest is one such treasure. It’s one of the historical landmarks of the city, but being that it’s a concert hall, I assumed that I wouldn’t be seeing the interior unless I went to a show.

When we passed by the Romanian Athenaeum, we admired it from the outside and enjoyed the garden that is adjacent to it. We spotted a sign on printed paper that said “Visitors” and had an arrow pointed to one side. We came to an unassuming side door, which had absolutely no indication that this was a visitor entrance.

But someone inside beckoned us in. We were met by a friendly security guard who was watching the CCTV on an old tube TV. He told us it would be 10 leu to see it (a little over $2). We were pretty sure that this was not any kind of official tour. We later confirmed this when we looked at the Athenaeum website and found that you had to contact the philharmonic to arrange tours. But according to TripAdvisor reviews, this is fairly common. Sometimes it’s the janitor and sometimes it’s the security guard, but there’s always someone willing to show you the inside. ...... (follow the instructions below for accessing the rest of this article).
This article is featured in the app "GPSmyCity: Walks in 1K+ Cities" on iTunes App Store and Google Play. You can download the app to your mobile device to read the article offline and create a self-guided walking tour to visit the attractions featured in this article. The app turns your mobile device into a personal tour guide and it works offline, so no data plan is needed when traveling abroad.