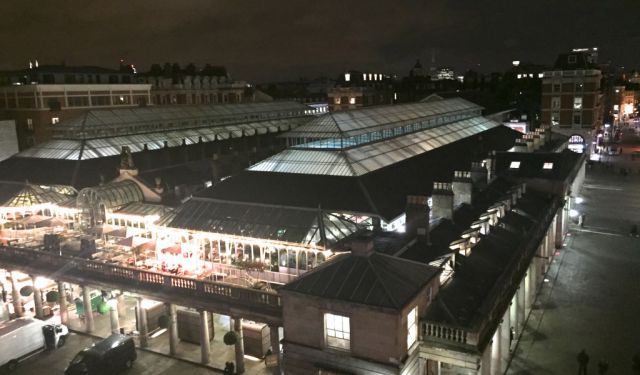 My Favourite Things in London's Covent Garden, London, England (B)

Covent Garden is one of the most vibrant and exciting areas of London, full of shops, cafés and restaurants, theatres and the famous Royal Opera House. The area spreads north of The Strand from Drury Lane westwards to St Martin’s Lane and up to the top end of Shaftesbury Avenue. There has been a settlement there since Anglo-Saxon times in the 7th century. At the beginning of the 13th century, the area was a ‘garden’ to Westminster Abbey, with arable land and orchards – hence becoming known as the ‘garden of the abbey and convent’. In 1654 a small fruit and vegetable market opened that grew into a famous one – remember Eliza Doolittle in My Fair Lady? I remember it as a market from my childhood. It grew so big, and there was so much traffic congestion in the area, that the market was relocated in 1974 to the south of The Thames at Nine Elms, near Battersea, and is really just a market for wholesalers now and not nearly such a romantic setting.

You won’t find any fruit and vegetable stalls in Covent Garden now, but there’s a daily craft market, which is always fun to look round and you’ll find some lovely things – jewellery, handbags, paintings, all kinds of crafts. ...... (follow the instructions below for accessing the rest of this article).
This article is featured in the app "GPSmyCity: Walks in 1K+ Cities" on iTunes App Store and Google Play. You can download the app to your mobile device to read the article offline and create a self-guided walking tour to visit the attractions featured in this article. The app turns your mobile device into a personal tour guide and it works offline, so no data plan is needed when traveling abroad.