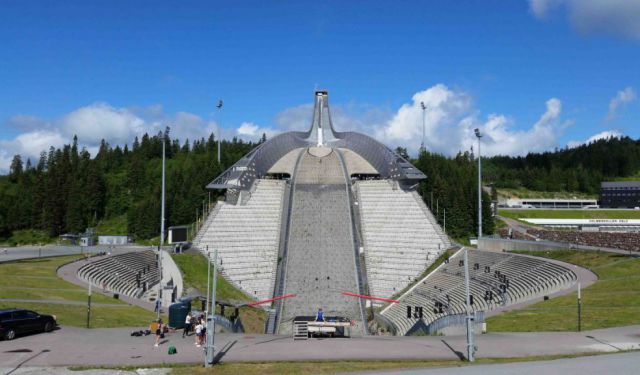 We got into Oslo a bit later than we had hoped for after a delayed flight, but the process upon landing was pretty simple. We found the Flytoget Express Train and took it to the Nationalthetret station. All we had to do was swipe our credit card at the turnstyle. We didn’t even get a ticket.

The train was quite full, so we sat on our luggage until we arrived 20 or 30 minutes later, I think after about three stops. We walked a few short blocks along the side of the park to our hotel, Hotel Christiania Theater that was in an absolutely perfect location. I really scored on this place, especially given the price. The only downfall was that there wasn’t any A/C, and it was unseasonably hot in Norway, but I suppose a lot of hotels don’t have A/C in the nordic country.

The extension of Slottsparken located directly in front of our hotel was home to the gay pride festival. After dropping off our luggage, we took a quick pass through this free event before we hung a right and headed toward the water front, only a few blocks away. Much to our surprise, some of the streets were barricaded and masses of people were lingering around listening to live music. We found out that some of the biggest Norwegian bands were playing at a free concert that is held once a year. Locals idled their boats in the harbor to listen while others held parties at their boat slips at the docks. Who knew we’d pick the weekend in Oslo when everything was happening. ...... (follow the instructions below for accessing the rest of this article).
This article is featured in the app "GPSmyCity: Walks in 1K+ Cities" on iTunes App Store and Google Play. You can download the app to your mobile device to read the article offline and create a self-guided walking tour to visit the attractions featured in this article. The app turns your mobile device into a personal tour guide and it works offline, so no data plan is needed when traveling abroad.