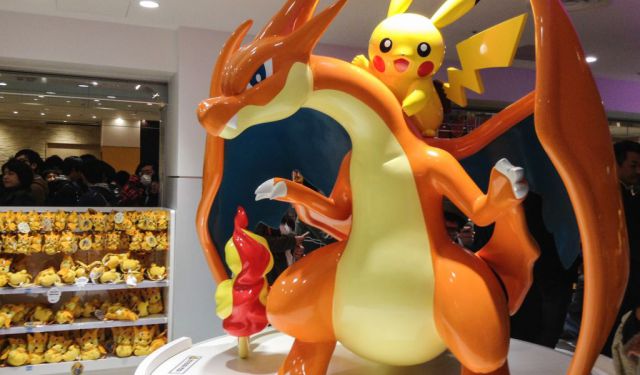 Pokemon Center in Ikebukuro - a Report of "Mega" Opening, Tokyo, Japan (B)

According to a shop crew, some people arrived there around 6 a.m. There were so many visitors that they decided to open the shop 1 hour and 20 minutes earlier. That's why I saw some people with Pokemon Center's shopping bags when I arrived at 9:50.

It is not very uncommon to be in a line for a long time in Tokyo. After all my experiences in a line, when I saw the looooong line, I got worried about how long I'd wait.

But it was not so boring to be in line. I had a lot to do. Walls are all Pokemons. My favorite Booster is among them.

Everyone had their Nintendo 3DS. Many were playing Pokemon Omega Ruby/Alpha Sapphire just released in November. I was so busy at Street Pass Mii Plaza. My Street Pass light was twinkling all the time. There were some Germans, Australians and Americans. Welcome to Tokyo!

And I saw some lucky boys with Pokemon Center's Birthday Crowns. They have birthday coupons, too. Happy birthday! ...... (follow the instructions below for accessing the rest of this article).
This article is featured in the app "GPSmyCity: Walks in 1K+ Cities" on iTunes App Store and Google Play. You can download the app to your mobile device to read the article offline and create a self-guided walking tour to visit the attractions featured in this article. The app turns your mobile device into a personal tour guide and it works offline, so no data plan is needed when traveling abroad.