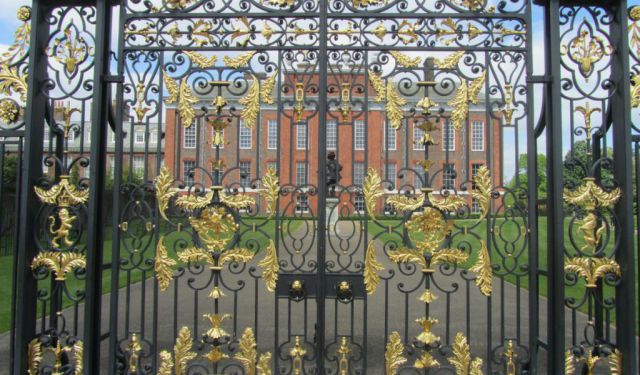 Searching for the Royals at Kensington Palace, London, England (B)

My ten year old is obsessed with the Royal Family. It started when he was three and asked for a royal birthday party with a cake in the shape of a king’s head. He wore a purple cloak and a crown for the whole day – and for most of the next two years. Nowadays he reads everything he can get his hands on about the royals past and present. His favourite are the Queen (obviously) and Prince Harry but he loves reading all the stories about the famous kings and queens of the past, particularly Queen Elizabeth I and Queen Victoria.

We’ve visited Buckingham Palace, Hampton Court and Windsor Castle so it was only a matter of time before we made it to Kensington Palace, the current London home of William and Kate and former home of Princess Diana and Queen Victoria.

The first thing you see are the iconic Gold Gates, so well remembered for being the focus of public grief in the summer of 1997 after the death of Diana, Princess of Wales, when they were covered with flowers which stretched all the way into Kensington Gardens. ...... (follow the instructions below for accessing the rest of this article).
This article is featured in the app "GPSmyCity: Walks in 1K+ Cities" on iTunes App Store and Google Play. You can download the app to your mobile device to read the article offline and create a self-guided walking tour to visit the attractions featured in this article. The app turns your mobile device into a personal tour guide and it works offline, so no data plan is needed when traveling abroad.