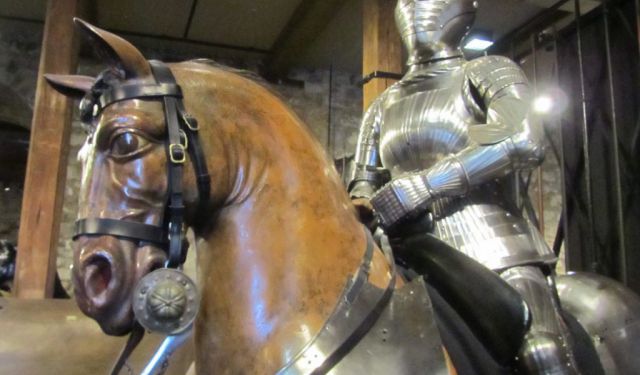 Seven Things You Must Do at the Tower of London, London, England (B)

The Tower of London is one of the most iconic sites in the capital and an absolute must-see for anyone planning a visit to London. It’s great for kids who relish the more horrible parts of history as it’s packed with stories of torture, deaths, imprisonments, hauntings and murder. You’ll find everything from suits of armour to some of the most famous jewels in the world.

There’s so much to see and do here that it can seem a bit overwhelming. Here’s my guide to some of the best bits.

The Yeoman Warder Tours are a fantastic way to start your visit to the Tower. The Yeoman Warders (or Beefeaters as they’re more commonly known) live at the Tower and have guarded it for 500 years. They need to have served honourably in the armed forces for at least 22 years before they can even be considered for the job.

The tours take place every 30 minutes and take about an hour. The Yeoman Warders are full of stories and often very amusing. They’ll tease, disgust and entertain your kids in equal measure. We loved finding out that the reason why the grass is so green in the moat is because it used to be filled with carcasses, plague victims, rats and poo. Or that the Tower’s first prisoner managed to escape from the White Tower by sliding down a rope that had been smuggled into his cell in a wine casket. We found out that wild animals like elephants, bears and tigers were kept in the Tower as part of the Royal Menagerie, including a polar bear who used to catch fish from the River Thames and a zebra who liked to drink beer from the soldiers’ canteen! ...... (follow the instructions below for accessing the rest of this article).
This article is featured in the app "GPSmyCity: Walks in 1K+ Cities" on iTunes App Store and Google Play. You can download the app to your mobile device to read the article offline and create a self-guided walking tour to visit the attractions featured in this article. The app turns your mobile device into a personal tour guide and it works offline, so no data plan is needed when traveling abroad.

Create Your Own Self-Guided Walks in London
Guide Name: Seven Things You Must Do at the Tower of London
Guide Location: England » London
Guide Type: Self-guided Walking Tour (Article (B))
Author: Clare Thomson
Read it on Author's Website: https://suitcasesandsandcastles.com/2016/03/15/seven-things-you-must-do-at-the-tower-of-london/
Sight(s) Featured in This Guide: