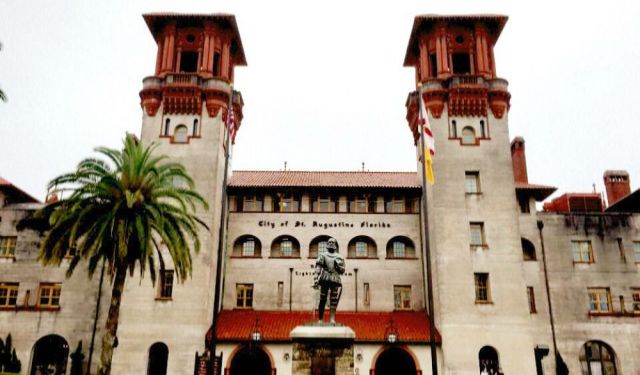 St. Augustine is one city that I was told I had to visit ever since I moved to Florida. Now that I’ve been, I’m one of those people telling others to go! St. Augustine was built by the Spanish and is the oldest city in the U.S.; it was also the capital of Florida for 200 years. I decided to stop in St. Augustine for one day on my trip, but I wish I had planned for two days. The town is on the east coast of Florida and since I was driving up from Orlando, I made a checklist of my St. Augustine bucket list to hit in order on my way up. St. Augustine has so much history to offer and the trip was a nice change from the theme parks.

My first stop was The Rocks at Washington Oaks Gardens State park, which are rock formations made of coquina. It was overcast that day, but it was still beautiful! I had never seen rock formations on the beach before, so this was a real treat for me. The beach is on the opposite side of the road from the park. There is a box on the road to collect the entrance fee (check the website for the amount since the fee fluctuates) and get a pass. The pass is valid all day and is for both entrances of the park. ...... (follow the instructions below for accessing the rest of this article).
This article is featured in the app "GPSmyCity: Walks in 1K+ Cities" on iTunes App Store and Google Play. You can download the app to your mobile device to read the article offline and create a self-guided walking tour to visit the attractions featured in this article. The app turns your mobile device into a personal tour guide and it works offline, so no data plan is needed when traveling abroad.