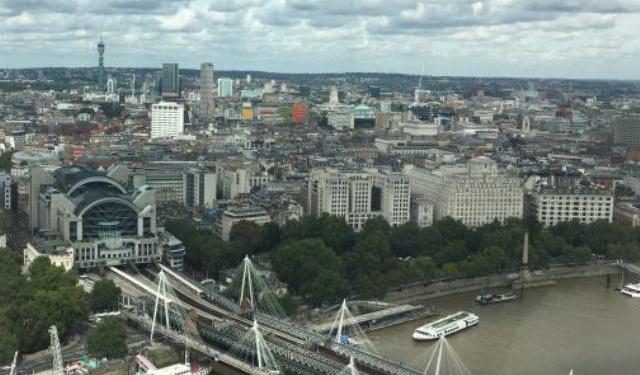 The London Eye with Kids: Is it Worth a Visit?, London, England (B)

“Are we nearly at the top,” my daughter exclaimed as we glided upwards in London’s iconic wheel. I’ve seen my home city from various viewpoints over the years, from the Tate Modern and Shard to St Paul’s Cathedral. But we’d never experienced the most obvious, The London Eye on the south bank of the River Thames. How would it differ from other vantage points and is a visit worth the (rather steep) price tag?

The London Eye was never intended to be a permanent structure. It was built in 1999 to commemorate the Millennium and was due to be dismantled after five years. But its popularity meant it remained in place and has become an iconic fixture on the London skyline. As a treat for my daughter’s sixth birthday, I booked tickets. She had often looked up at the giant wheel as we’d passed and wistfully noted “I wish I could go up there”. This time, as we drew closer, I excitedly confirmed that “yes, we would be!”.

I waited until the day before to check a clear day was forecast before booking tickets online (which saves you 10%). There were still some available and we got a timed slot. Although it saved us waiting to buy tickets, we were still in a queue with everyone else. It did move quickly though. ...... (follow the instructions below for accessing the rest of this article).
This article is featured in the app "GPSmyCity: Walks in 1K+ Cities" on iTunes App Store and Google Play. You can download the app to your mobile device to read the article offline and create a self-guided walking tour to visit the attractions featured in this article. The app turns your mobile device into a personal tour guide and it works offline, so no data plan is needed when traveling abroad.

Create Your Own Self-Guided Walks in London
Guide Name: The London Eye with Kids: Is it Worth a Visit?
Guide Location: England » London
Guide Type: Self-guided Walking Tour (Article (B))
Author: Elizabeth Callaghan
Read it on Author's Website: http://www.wandermum.co.uk/the-london-eye-with-kids-is-it-worth-a-visit/
Sight(s) Featured in This Guide: