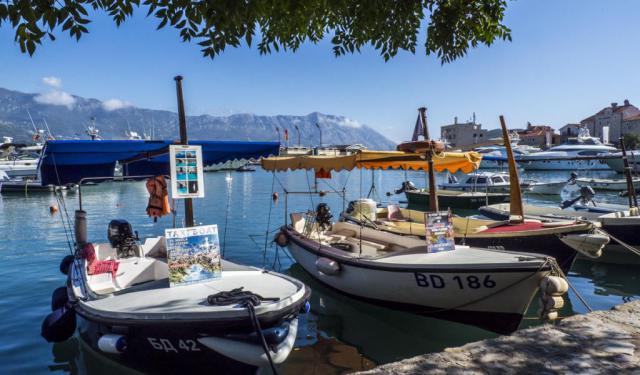 The Magicial Old Town of Budva in Montenegro, Budva, Montenegro (B)

Budva is a town divided by history. When the Old Town, surrounded by its medieval walls became too small for a growing population it spilled out along the shoreline on either side of it. Its beauty is enhanced by the small bays indenting the blue Adriatic Sea in front of it and the dramatic, grey, limestone mountains behind it.

A very pleasant approach to approach Budva, a resort in Montenegro is a gentle stroll along the sea front or Budva Riviera as it is now known. Colourful little boats bob on the surface of the Adriatic Sea along the quay of Budva port. Somewhat overshadowed by the luxury yachts further along the quay they offer trips to the off-shore islands of Sveti Stefan and Sveti Nikola. Boat taxis are also available, a lovely way to return to the hotels around the adjacent bays after some good-humoured fare bargaining.

Budva Old Town is a town full of history and legends. It goes back to Roman times when Roman and Greek necropolis (cemetery) was established here. When the foundations were being dug for the Hotels Ava and Mogren from 1936 to 1938 some graves were discovered. Following a disastrous earthquake in 1979 the foundations of a Roman villa, now known as Villa Urbana were revealed close to the graves. Many Roman and Hellenistic artefacts including gold and silver jewellery were also discovered and these are now on display in the Ethnographic Museum in the old town. The ruins of Villa Urbana can be seen close to Porta di Terra Ferma, the main gate into the old town. ...... (follow the instructions below for accessing the rest of this article).
This article is featured in the app "GPSmyCity: Walks in 1K+ Cities" on iTunes App Store and Google Play. You can download the app to your mobile device to read the article offline and create a self-guided walking tour to visit the attractions featured in this article. The app turns your mobile device into a personal tour guide and it works offline, so no data plan is needed when traveling abroad.