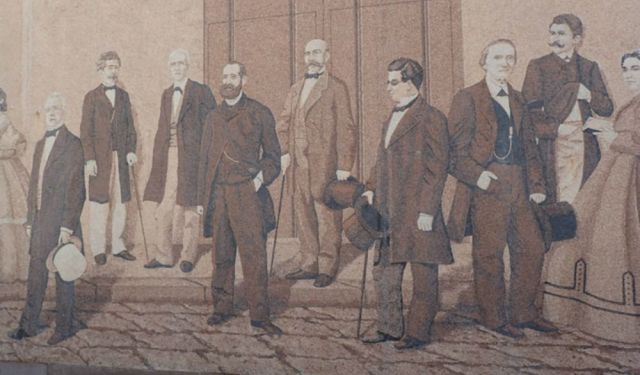 The Streets of Habana Vieja and Fusterlandia - Part II, Havana, Cuba (B)

From the university, we passed by the Cuban History Mural. The mosaic mural depicts 67 outstanding figures in the Cuban history, including theologists, lawyers, aristocrats and the like along with only one black person, a famous musician. From the mural, we moved on to Plaza de la Catedral named for Catedral de la Habana. Here Cubans dressed in their Sunday best and posed for pictures with tourists for small tips.

After visiting this plaza, we stopped in at the Museo de la Revolución. We had to check our large bags as many places require worldwide, but it wasn’t for stealing anything, it was for fear of weapons. I can’t say the museum was terribly exciting to visit as it mostly included pictures and descriptions of the leaders of the revolution rather than memorabilia of any kind, but it was interesting to learn the history of the revolution, to see a few ornate rooms of Batista’s palace, and to witness the bullet holes in an attempted assassination of Batista in 1957. It was also odd to see random busts of presidents along one hallway including Abraham Lincoln. Of course, when we rounded the corner on the bottom floor, our tour guide made sure to explain the next exhibit was a joke. It was called the “Corner of Cretins”. The Cretins were Batista, Reagan, Bush Sr. and W. The signs next to each read, respectively: ...... (follow the instructions below for accessing the rest of this article).
This article is featured in the app "GPSmyCity: Walks in 1K+ Cities" on iTunes App Store and Google Play. You can download the app to your mobile device to read the article offline and create a self-guided walking tour to visit the attractions featured in this article. The app turns your mobile device into a personal tour guide and it works offline, so no data plan is needed when traveling abroad.