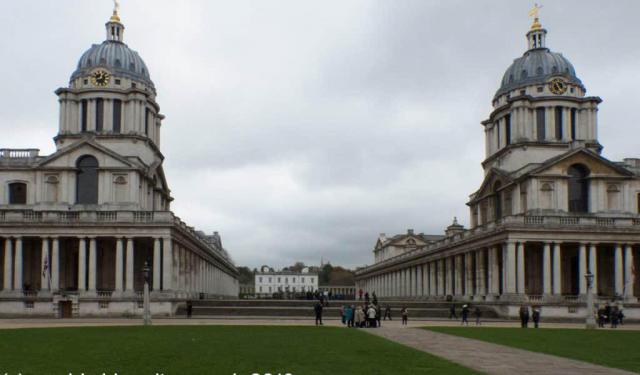 The UNESCO World Heritage of Greenwich, London, England (B)

One of the many pleasures of a visit to Greenwich is the architecture. If you arrive by boat, or from the other side of the Thames, your first sight is likely to be the classic view of the Old Royal Naval College, with its baroque architecture and twin domes. And the recent restoration of the Painted Hall, a dining room covered with 18th century paintings, makes a visit to the Naval College even more memorable.

The complex of buildings that formed the Old Royal Naval College were built at different times. And they have had a variety of uses over the centuries.

The history of the site goes back further than the buildings you see today. The first building in this location was Greenwich Palace, also known as the Palace of Placentia. It was built for a private owner in 1447, but later taken over and expanded by Henry VII. The palace was the birthplace of Henry VIII and of his daughters, Mary I and Elizabeth I.

By the end of the Civil War, in the mid-1600s, Greenwich Palace had fallen into disrepair and was subsequently demolished to make way for a new building. However, two rooms from the Tudor palace – part of the kitchens and service areas – were discovered beneath the Undercroft of the Naval College during restoration work in 2017. ...... (follow the instructions below for accessing the rest of this article).
This article is featured in the app "GPSmyCity: Walks in 1K+ Cities" on iTunes App Store and Google Play. You can download the app to your mobile device to read the article offline and create a self-guided walking tour to visit the attractions featured in this article. The app turns your mobile device into a personal tour guide and it works offline, so no data plan is needed when traveling abroad.