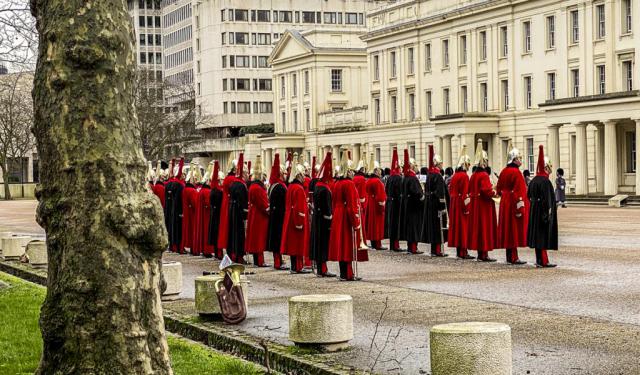 Touching, Tasting and Listening to London, London, England (B)

Travelling with groups organised by TravelEyes has brought a whole new meaning to sightseeing for me. In London we touched iconic buildings, tasted traditional cuisine and listened to the music of the Regimental Band marching to Buckingham Palace.

Our tour started in Parliament Square. It was led by Robin Spencer who works with Free London Walking Tours. After leaving Parliament Square we walked down Birdcage Walk alongside St James’s Park. Robin’s commentary was peppered with fascinating stories including the provenance of the London Plane tree and the origins of street names. For example, Bird Cage Walk was originally the home of an aviary created by James 1 and enlarged by his grandson, Charles II. The birds were kept in cages that were hung on the trees lining this road. ...... (follow the instructions below for accessing the rest of this article).
This article is featured in the app "GPSmyCity: Walks in 1K+ Cities" on iTunes App Store and Google Play. You can download the app to your mobile device to read the article offline and create a self-guided walking tour to visit the attractions featured in this article. The app turns your mobile device into a personal tour guide and it works offline, so no data plan is needed when traveling abroad.