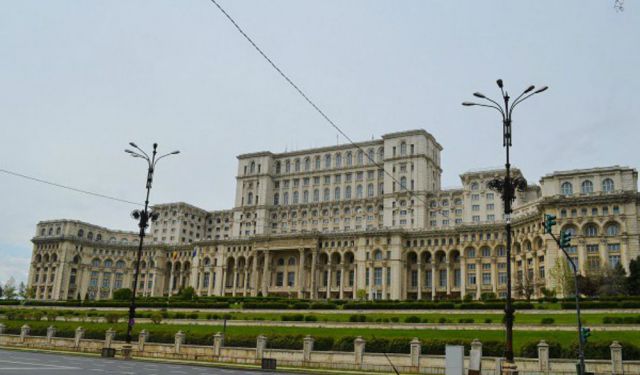 Visiting the Palace of the Parliament in Bucharest, Bucharest, Romania (B)

Like religion, there’s often nothing more grandiose and over-the-top than the government. And Bucharest’s Palace of the Parliament is a shining example of that. Unbeknownst to me, the building is actually record-breaking for several reasons.

The imposing structure, which has 15 floors above ground and 5 below is the second-largest building in the world after the Pentagon. It’s also the world’s most expensive administrative building and the heaviest building. I think it’s hard to really conceptualize the size of it until you’re standing on the other end of Union Boulevard and you realize it’s still the most imposing building in the city.

Of course, something this elaborate could only be the brainchild of communism. The building, which was conceived in 1977, was actually designed to be a replica of North Korea’s Pyongyang – a city within a city to house all the offices and marvels of the communist party. And in a grand nationalistic fashion, every single material used in the building is from Romania. Romanian wood, Romanian silver and gold, Romanian crystal, Romanian marble. Absolutely nothing was imported. The building was intended to be a proud symbol of the country’s power. ...... (follow the instructions below for accessing the rest of this article).
This article is featured in the app "GPSmyCity: Walks in 1K+ Cities" on iTunes App Store and Google Play. You can download the app to your mobile device to read the article offline and create a self-guided walking tour to visit the attractions featured in this article. The app turns your mobile device into a personal tour guide and it works offline, so no data plan is needed when traveling abroad.