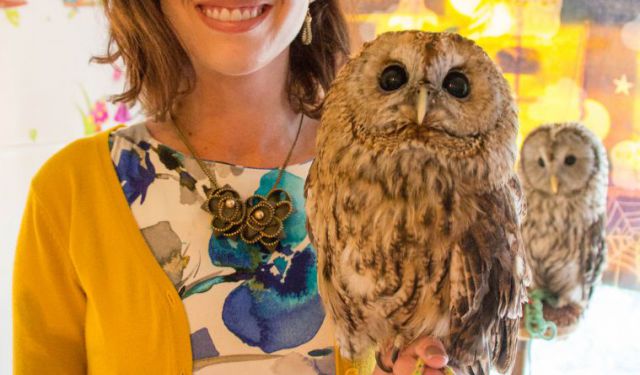 I had heard of cat cafes, but it wasn’t until this weekend that I was introduced to an owl “cafe.” My friend, Shannon, had sent me a Buzzfeed article with a list of wacky things to try in Tokyo. At the top of the list was visiting Fukuro no Mise – an owl cafe. It had awesome reviews on TripAdvisor and Google…and wasn’t too far away from us, so, my husband and I decided to see what it was all about!

We arrived an hour before it opened to make a reservation (they don’t take reservations until the day of)…and then we went and had a snack at a neighboring cafe. (Fukuro no Mise does not serve food.)

When I think of cafes, I think of something similar to Starbucks. That was surely not the case with Fukuro no Mise! It’s a dimly lit building filled with various breeds of owls on perches, and you get one (non-alcoholic) beverage included in the price of your reservation (roughly $20 USD), and they also gave us a cute piece of owl jewelry when we were leaving.

How it works is the staff allows 12 people in at a time, and you get one hour at the cafe to interact with the tame owls. The staff sits everyone down before they enter to go over how to interact with the owls and explain that these are not wild owls, but they were raised from baby on by Fukuro no Mise’s owner (which is why they don’t mind people). “You can have an owl perched on your hand or shoulder (some people wanted the smaller ones on their heads for photos as well), but the staff must assist you with doing so. You can only lightly touch the top of the owl’s head, moving from front to back – don’t ruffle their feathers or touch any other part of them. You are not allowed to wear perfume around the owls, as this can be harmful to them. Don’t make any sudden movements, loud noises or take photos with a flash.” I had been a bit worried that it would be a people just doing whatever they wanted with the owls – so, I was relieved to see there were rules (and staff) in place to keep the owls safe. ...... (follow the instructions below for accessing the rest of this article).
This article is featured in the app "GPSmyCity: Walks in 1K+ Cities" on iTunes App Store and Google Play. You can download the app to your mobile device to read the article offline and create a self-guided walking tour to visit the attractions featured in this article. The app turns your mobile device into a personal tour guide and it works offline, so no data plan is needed when traveling abroad.