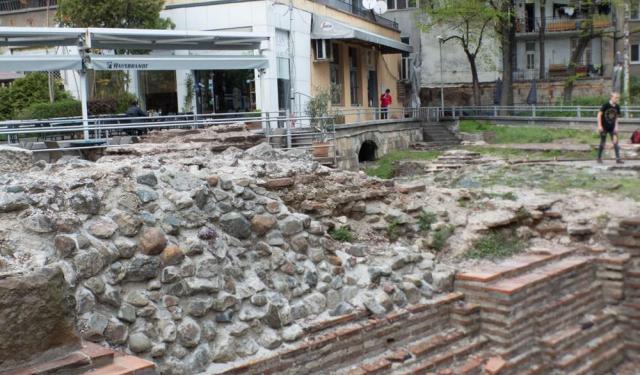 Where to Find the Romans in Sofia, Sofia, Bulgaria (B)

I was aware that Bulgaria was once part of the Roman Empire, and that there were impressive Roman remains in some parts of the country. However I hadn’t expected to find much in Sofia, the capital city. So I was surprised at how much evidence there was of the Romans in Sofia. This is a guide to the currently accessible sites of Roman Sofia (but please let me know if I’ve missed any…)

But first, a bit of history. The Romans arrived in Sofia around 29 BC. They built a settlement around the hot mineral springs, and named it Serdica (or Serdika). It was strategically situated on the Via Militaris, a major road linking the Eastern and Western Empires, and by the 3rd century Serdica had increased in importance. The city expanded, and there were many new buildings. The Emperor Constantine based himself here: he is reputed to have said “Serdica is my Rome”.

Although we know when the Romans arrived in Sofia, it’s not quite so clear when they left. In western Europe we tend to talk of the “Fall of the Roman Empire” as having occurred in AD 476, when German armies deposed the last emperor in Rome. However, by this time the empire had divided into eastern and western sections. The Eastern Roman Empire, which became known as Byzantium in the 4th century, lasted until the Fall of Constantinople in 1453. ...... (follow the instructions below for accessing the rest of this article).
This article is featured in the app "GPSmyCity: Walks in 1K+ Cities" on iTunes App Store and Google Play. You can download the app to your mobile device to read the article offline and create a self-guided walking tour to visit the attractions featured in this article. The app turns your mobile device into a personal tour guide and it works offline, so no data plan is needed when traveling abroad.