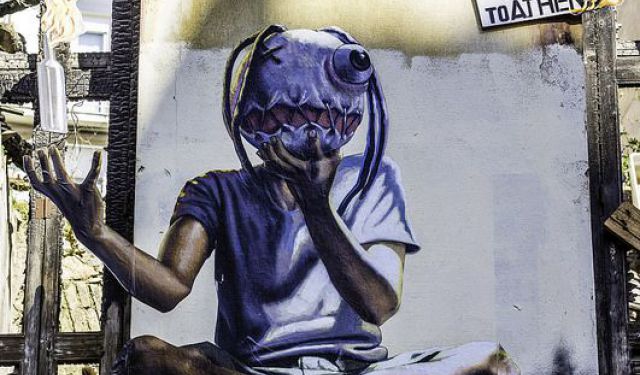 A Walk in Controversial Exarcheia District (Self Guided), Athens

Exarcheia is a hip haven of bohemian cool with a controversial past. This neighborhood of artists, students and intellectuals among others hit the headlines in 2008 for riots and troubles after a policeman shot and killed a 15-year-old boy. There is a shrine to the teenage student, set in a wall covered in graffiti. Exarcheia is also the home of the University of Athens, where there was a massive uprising in 1973 against the then ruling military junta. Many of today’s students live in the area, contributing greatly to its cool, laidback vibe. See lots of examples of free expression on the neighborhood’s buildings, their bricks and plaster used as canvasses for wall art and graffiti.

The heart of the neighborhood is Exarcheia Square, a small plaza with cafés and fast food restaurants. On its west side is an old blue building, one of the first apartment buildings in Athens. After relaxing in the square, take to the streets that surround it and explore their shops.

There are also a number of good dining options in Exarcheia with lots of well-priced tavernas and restaurants. For music fans, there are several rock clubs which also feature other musical genres such as live jazz and blues. This is also a great place to hear traditional music, played on such instruments as a bouzouki.
Image Courtesy of Flickr and Sascha Kohlmann.
How it works: A discovery walk features a route using which you can explore a popular city neighborhood on your own. This walk, along with other self-guided walks in over 1,000 cities, can be found on the app "GPSmyCity: Walks in 1K+ Cities" which can be downloaded from iTunes App Store or Google Play to your mobile phone or tablet. The app's built-in GPS navigation functions allow following this walk route with ease. The app works both online and offline, so no data plan is needed when traveling abroad.

5) The Blue Condominium of Exarcheia

13) Athens University of Economics and Business