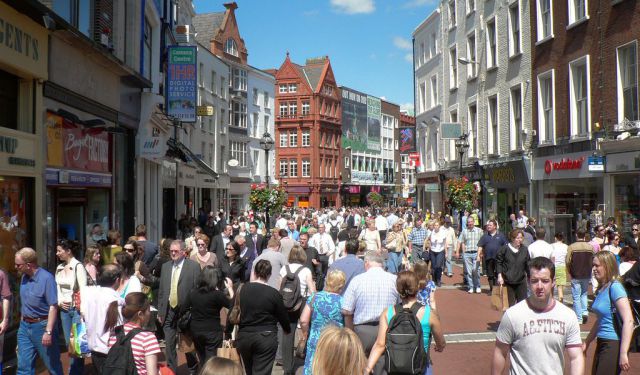 Image by Aapo Haapanen on Flickr under Creative Commons License.

Dublin's north and south inner city areas impress with their shopping opportunities that can easily rival other major cities in the world. The hub of retail activity is on two pedestrianized streets, Grafton Street and Henry Street.

Start your exciting purchasing extravaganza on Grafton Street, the principle shopping destination in the city center. Some visitors comment that the area reminds them of the Champs-Élysées in Paris or New York's Times Square. You can easily see how they reach this conclusion with the variety of high-end and mainstream stores, bars, cafés and restaurants. Lose yourself in a retail paradise that includes St. Stephens Green Shopping Center at the top of Grafton Street.

Then make your way over to Henry Street where there are more than 200 shops, some of which can only be found in Ireland. Leading department stores such as Marks and Spencer and Roches are also to be found here. Other great shopping locations in the area include Jervis Shopping Center and the George's Street Arcade. The arcade is possibly the oldest shopping center in Ireland having first opened its doors in 1881. Inside this Victorian market are independent boutiques and stalls selling art, jewelry, music, souvenirs and collectibles.
How it works: A discovery walk features a route using which you can explore a popular city neighborhood on your own. This walk, along with other self-guided walks in over 1,000 cities, can be found on the app "GPSmyCity: Walks in 1K+ Cities" which can be downloaded from iTunes App Store or Google Play to your mobile phone or tablet. The app's built-in GPS navigation functions allow following this walk route with ease. The app works both online and offline, so no data plan is needed when traveling abroad.

Image by IrishForever Or DEATH under Creative Commons License.