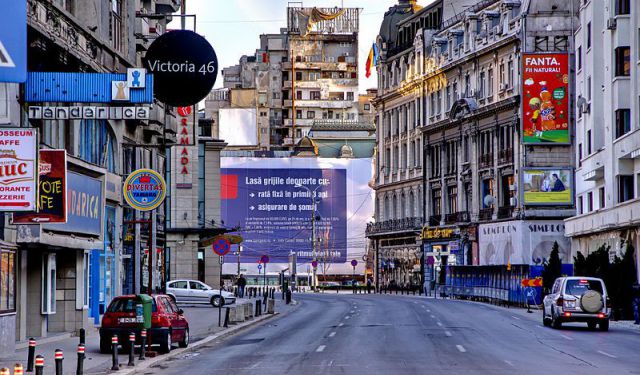 Image by Constantin Barbu on Wikimedia under Creative Commons License.

When shopping is this good, you just want to keep on browsing and buying. Bucharest’s center has the best commercial areas in the city. Within its limits are famous streets, top European retailers and beautiful architecture.

The best of the city center’s shopping districts are Calea Victoriei and Bulevardul General Magheru. These are upmarket areas where you will find some of the biggest European chains. Calea Victoriei used to be part of a vital trade route between Bucharest and the city of Brasov in Transylvania. Today, this major avenue boasts fashion shops, art boutiques, coffee shops and restaurants.

Other great retail therapy locations in the city include Lipscani Street with its shops, restaurants and bars. Between the Middle Ages and 19th century this was the city’s most important commercial area. Nearby is Pasajul Villacrosse, a gorgeous 19th-century arcade that is covered by a yellow glass roof and home to many cafés.

Find your way to Magheru Boulevard, the most expensive commercial street in Romania. It is also one of the most visited shopping streets in Bucharest. One of the nicest things about a walk on this central street is some of the architecture, where you can see modernist designs from the 1930s.
How it works: A discovery walk features a route using which you can explore a popular city neighborhood on your own. This walk, along with other self-guided walks in over 1,000 cities, can be found on the app "GPSmyCity: Walks in 1K+ Cities" which can be downloaded from iTunes App Store or Google Play to your mobile phone or tablet. The app's built-in GPS navigation functions allow following this walk route with ease. The app works both online and offline, so no data plan is needed when traveling abroad.