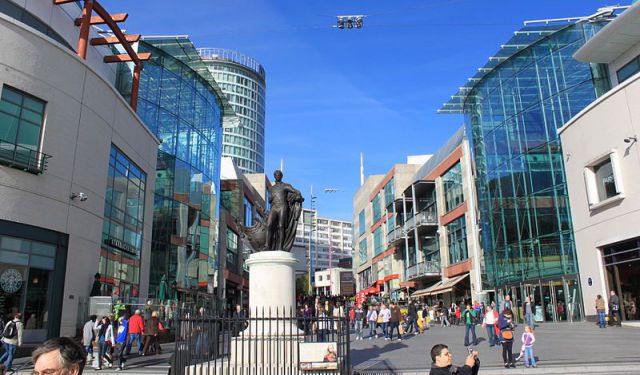 Birmingham city center is a lively and exciting place to shop. Whether you are looking for high street bargains or exclusive designer brands, there is something for everyone. One of the city's principal thoroughfares is New Street, which extends from the Bullring Shopping Center at one end to Council House at the other. This is the seat of the local government. Along its length are many popular high street chains, while narrow streets lead off it to numerous other stores and boutiques.

Some of these roads have intriguing names, such as Needless Alley and Cannon Street. A destination for many shoppers is the Bullring. With more than 160 stores, including the iconic Selfridges department store, this is one of the largest shopping centers in the UK. There are more fantastic shops over on Corporation Street, the lower end of which is pedestrianized.

Find big name stores on High Street, including Boots, H&M and Waterstones. As you stroll along its length, you may well be entertained by some of the best street entertainers in the city. From this avenue, you can access Pavilions, a major shopping center with more than 30 retailers and a food court on the top floor. Other prime shopping locations in the city center are the Piccadilly and Burlington Arcades. Both feature independent retailers, jewelers and beauty stores.
How it works: A discovery walk features a route using which you can explore a popular city neighborhood on your own. This walk, along with other self-guided walks in over 1,000 cities, can be found on the app "GPSmyCity: Walks in 1K+ Cities" which can be downloaded from iTunes App Store or Google Play to your mobile phone or tablet. The app's built-in GPS navigation functions allow following this walk route with ease. The app works both online and offline, so no data plan is needed when traveling abroad.

**Apart from the relatively new buildings in the city – like Grand Central, the Library, and Selfridges...  view more