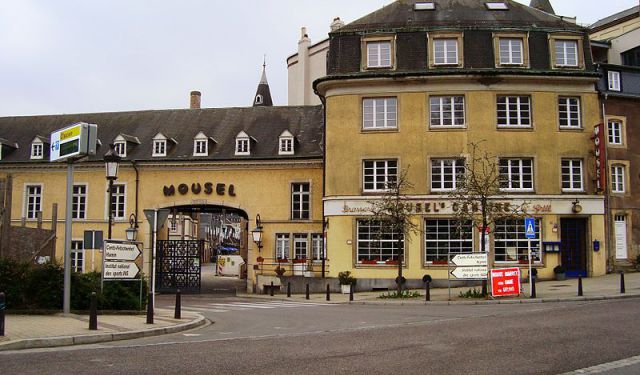 Image by Rombou on Wikimedia under Creative Commons License.

With its scenic setting, picturesque buildings, pulsating nightlife and historical attractions, the affluent residential neighborhood of Clausen is a must-see on any visit to Luxembourg. This is one of the oldest parts of the city and it has a long association with breweries, ever since the 12th century.

In recent years, Clausen has enjoyed something of a resurgence. In large part this is due to the Rives de Clausen, an area of restaurants and bars in the grounds of a former brewery. This hub of nightlife activity enjoys a fabulous location by the shores of the Alzette River. Start off your evening with an aperitif in a trendy bar, move on to a gourmet restaurant, then finish off with a late-night cocktail. Each bar has its own distinctive flavor, and so it is highly likely that you will find one with an ambience that suits your tastes.

During the day, investigate Huelen Zant (Hollow Tooth). This is the only surviving tower of one of the fortress gates of the old castle on the Bock rock. During demolition works in late 19th century, only half of the structure was destroyed. What was left behind resembles the crumbling remains of a medieval castle. Although there isn’t much of the tower to see, the views below of the city and the river valley are outstanding.
How it works: A discovery walk features a route using which you can explore a popular city neighborhood on your own. This walk, along with other self-guided walks in over 1,000 cities, can be found on the app "GPSmyCity: Walks in 1K+ Cities" which can be downloaded from iTunes App Store or Google Play to your mobile phone or tablet. The app's built-in GPS navigation functions allow following this walk route with ease. The app works both online and offline, so no data plan is needed when traveling abroad.