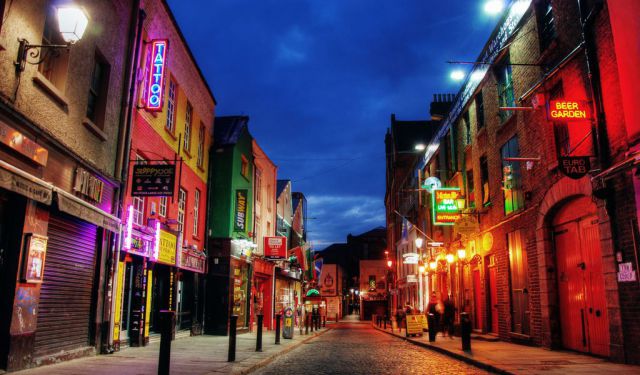 Dublin has an exciting and effervescent nightlife in its bars, clubs and live music venues. The party capital of Dublin's city center is Temple Bar with a superb range of bars, many of which host live bands. There is always something wonderful going on.

Tap your feet to traditional Irish music, rock, jazz and many other musical genres. Here you can visit one pub after another, all within a mere few footsteps of each other. This part of the city also features a number of trendy bars, where the fashionable young crowd, particularly students like to see and be seen. The Docklands area is fast becoming one of the hip places to be at night, home to some of the newest restaurants and where there are bars and cafés to suit the tastes of a diverse clientele. They run the gamut from traditional pubs to elegant and sophisticated bars.

The city’s nightlife scene is always on the move, never standing still for a single second. So there will always be something new to catch your attention. During your time in the city center area, walk across one of its most famous and photographed landmarks, the Ha'Penny Bridge. This cast iron pedestrian bridge was built in 1816 and spans the River Liffey. It was originally known as Wellington Bridge after the Duke of Wellington.
Image Courtesy of Flickr and Barnacles Budget Accomodation.
How it works: A discovery walk features a route using which you can explore a popular city neighborhood on your own. This walk, along with other self-guided walks in over 1,000 cities, can be found on the app "GPSmyCity: Walks in 1K+ Cities" which can be downloaded from iTunes App Store or Google Play to your mobile phone or tablet. The app's built-in GPS navigation functions allow following this walk route with ease. The app works both online and offline, so no data plan is needed when traveling abroad.