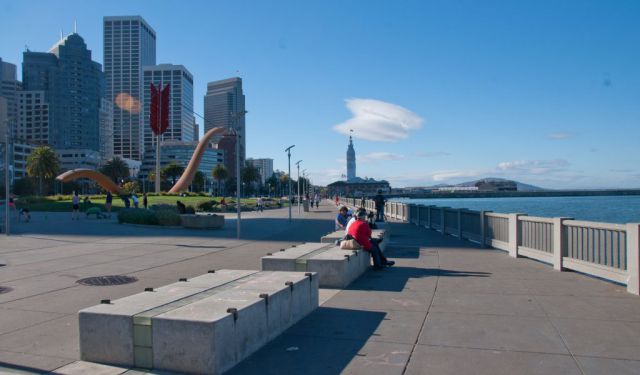 The Embarcadero is a true San Francisco gem, yet it is a place that many people haven't visited, let alone heard about. What it offers are some great views and delightful attractions. It sits on the eastern waterfront of the Port of San Francisco, which makes it an excellent place for a stroll, bike ride or skating or rollerblading excursion.

On your travels through the area, you will come across the Ferry Plaza Farmer’s Market in the historic Ferry Building. Stock up on a delicious range of fresh and regional produce. The market is in operation every Tuesday, Thursday and Saturday. Before you browse the stalls, have a little look around the old building, which prior to the completion of the two San Francisco bridges was the second busiest transit terminal in the world.

While away many happy hours at the new Exploratorium at Pier 15. This exploration of the wonders of science features hundreds of hands-on and interactive exhibits. It opened in 2013 and is five times as large as the old Exploratorium which was located in the Palace of Fine Arts. Your meanderings through the area will take you past many restaurants, parks, attractions and renovated piers, with a slice of history from every decade of San Francisco’s existence.
How it works: A discovery walk features a route using which you can explore a popular city neighborhood on your own. This walk, along with other self-guided walks in over 1,000 cities, can be found on the app "GPSmyCity: Walks in 1K+ Cities" which can be downloaded from iTunes App Store or Google Play to your mobile phone or tablet. The app's built-in GPS navigation functions allow following this walk route with ease. The app works both online and offline, so no data plan is needed when traveling abroad.