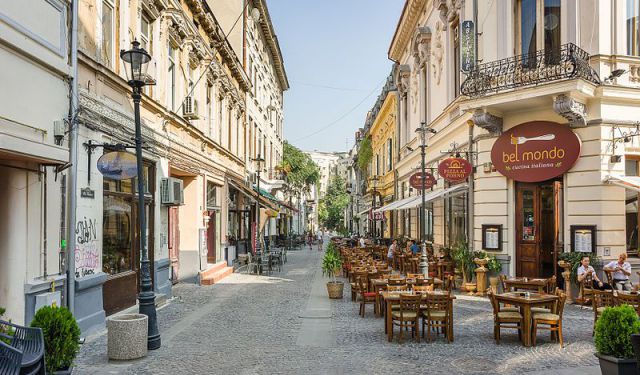 Lipscani is a very modern old town, a place with a medieval heart and buildings to match, but also where you can get down and party with the hip young crowd. For history and architecture lovers, there's much to be admired with a glorious mix of styles in the district, such as Baroque, Neoclassical and Art Nouveau.

A not-to-be-missed highlight are the remains of Curtea Veche (Old Princely Court). This grand property was built as a home in the 15th century during the reign of Vlad III Dracula, who is better known as Vlad the Impaler. What is left today are a few walls, arches and tombstones.

Spend a few hours touring Biserica Stavropoleos, a monastery that was founded in 1724. Study the beautiful frescoes and stroll in its cloister garden that's filled with antiques and where you will see several 19th-century tombstones. Lipscani is also where one of the most famous buildings in Bucharest once stood. This was Hanul Serban Voda (Serban Voda Inn), an inn that was founded in the 17th century. Today, the site is occupied by the National Bank of Romania.

If you have shopping on the agenda, go to Lipscanti Street, an old merchant avenue. Browse store such as Adidas and H&M as well as independent shops. Close to the east end of the street is Hanul cu Tei, a small alley of antique stores. At night, the area throbs to a different beat with many of the hottest and happening bars and restaurants located along Gabroveni and Lipscani streets.
Image Courtesy of Wikimedia and Mihai Petre.
How it works: A discovery walk features a route using which you can explore a popular city neighborhood on your own. This walk, along with other self-guided walks in over 1,000 cities, can be found on the app "GPSmyCity: Walks in 1K+ Cities" which can be downloaded from iTunes App Store or Google Play to your mobile phone or tablet. The app's built-in GPS navigation functions allow following this walk route with ease. The app works both online and offline, so no data plan is needed when traveling abroad.