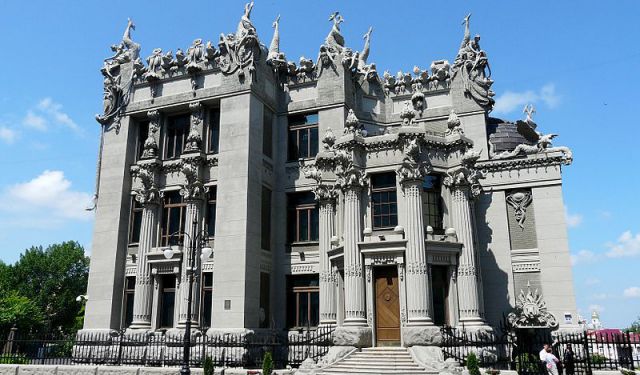 Fans of great architecture will be smiling with unbridled joy when they visit the beautiful historic neighborhood of Lypky. It is the de facto government quarter of Ukraine and features a number of fascinating buildings.

Take a tour of the partially pedestrianized Bankova Street, which is the home of the Presidential Administration of Ukraine and the House of Chimeras. This early 20th-century Art Nouveau building was originally constructed as a private home, but today hosts official and diplomatic ceremonies. Study the elaborate carvings on its façades, which feature hunting scenes and exotic animals, including deer, rhinoceroses and an elephant-head gargoyle.

Check out the palatial mansion known as Chocolate House, which gets its name from its unusual brown coloring. This mesmerizing Venetian Renaissance pile was built in the 1890s and the rooms are decorated in such historical styles as Mauritanian, Renaissance, Art Nouveau, Rococo and Byzantine.

Take in a show at the October Palace, an opulent bright yellow building that is the most celebrated cultural institution in the capital. Then stop by the Supreme Council of Ukraine (Verkhovna Rada), the country's parliament.
Image Courtesy of Nick Grapsy.
How it works: A discovery walk features a route using which you can explore a popular city neighborhood on your own. This walk, along with other self-guided walks in over 1,000 cities, can be found on the app "GPSmyCity: Walks in 1K+ Cities" which can be downloaded from iTunes App Store or Google Play to your mobile phone or tablet. The app's built-in GPS navigation functions allow following this walk route with ease. The app works both online and offline, so no data plan is needed when traveling abroad.