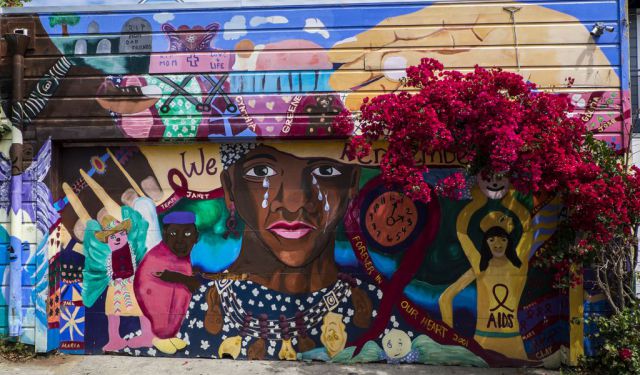 Image by emile lombard on Flickr under Creative Commons License.

The façades, fences, walls and sidewalks of the Mission provide a huge canvas for a vivid collection of street art. The look of buildings are transformed by the colorful, entertaining and sometimes thought-provoking creations of some exceptional talents. The district was founded in the late 18th century and is one of the oldest in the city. It is home to a predominately Latino population who provide its heart, soul and energy.

Much of the artwork you will see speaks to the local population’s hopes, aspirations and concerns as well as aspects of life that they cherish and celebrate. Take your time to study some of these magnificent pieces. There are lots of them to look at, because the Mission has the highest concentration of street art in the city. The work is often exceptional, elevating the art to a level that is something much more than mere daubings on exterior surfaces.

Enjoy your tour through the painted streets where you will come across lots of different styles and forms, such as murals, graffiti, and skater graphics. Some of the large murals in particular are incredible to witness. Elsewhere in the district, find lots of Mexican restaurants, grocery stores and activist bookstores.
How it works: A discovery walk features a route using which you can explore a popular city neighborhood on your own. This walk, along with other self-guided walks in over 1,000 cities, can be found on the app "GPSmyCity: Walks in 1K+ Cities" which can be downloaded from iTunes App Store or Google Play to your mobile phone or tablet. The app's built-in GPS navigation functions allow following this walk route with ease. The app works both online and offline, so no data plan is needed when traveling abroad.