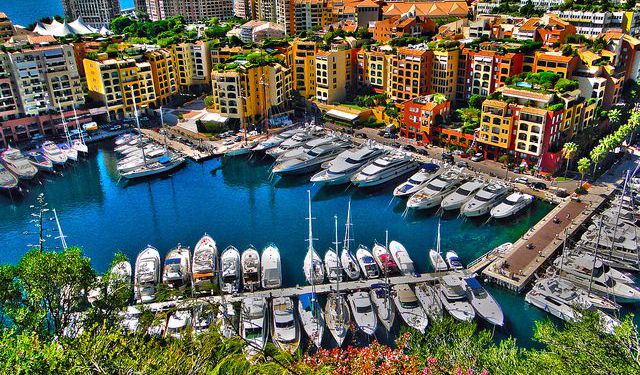 Image by Rodrigo Soldon on Flickr under Creative Commons License.

Familiarize yourself with Monaco-Ville, the oldest part of the principality of Monaco. Stroll along its pleasant jumble of cobblestone streets, past characterful buildings, small boutiques and souvenir and craft shops. Stop for a drink and a bite to eat at one of the delightful little cafés and restaurants. Among them is a generous smattering of Italian eateries, their sumptuous aromas filling the neighborhood at lunch and dinner time.

Monaco-Ville is a compact area, exuding beauty and charm and is a wonderful place to spend some time. It is where the visitor can get a good feel for old Monaco, before the modern skyscrapers were constructed and the luxury yachts and super yachts dropped anchor in the bay and port. While you are in this part of Monaco, go and see Saint Nicholas Cathedral.

This Roman-Byzantine-style place of worship was built in 1875 and is where many deceased members of the ruling Grimaldi family are buried, including Prince Rainier and Princess Grace, the former Hollywood actress Grace Kelly. Step inside the gorgeous looking building to admire the rich religious art and décor, such as an altarpiece that dates from the early 16th century. There is also an Episcopal throne in white Carrara marble.
How it works: A discovery walk features a route using which you can explore a popular city neighborhood on your own. This walk, along with other self-guided walks in over 1,000 cities, can be found on the app "GPSmyCity: Walks in 1K+ Cities" which can be downloaded from iTunes App Store or Google Play to your mobile phone or tablet. The app's built-in GPS navigation functions allow following this walk route with ease. The app works both online and offline, so no data plan is needed when traveling abroad.

Create Your Own Walk in Monte-Carlo

Creating your own self-guided walk in Monte-Carlo is easy and fun. Choose the city attractions that you want to see and a walk route map will be created just for you. You can even set your hotel as the start point of the walk.

Monaco – the world’s second smallest state – is also one of the world’s richest. The latter fact definitely shows in the historic buildings – famous casinos, opera house, hotels and opulent palaces – found in the central ward Monte-Carlo, displaying a range of architectural styles quite wide for a small country like this.

Situated on a prominent escarpment at the base of the Maritime Alps washed by the Mediterranean Sea, the district of Monte Carlo is an administrative center of the tiny Principality of Monaco.

The latter owes its name to the nearby 6th-century BC Greek colony, seemingly linked to the Greek hero Hercules who visited the area and built here a temple – a sole structure, back then – which came...  view more