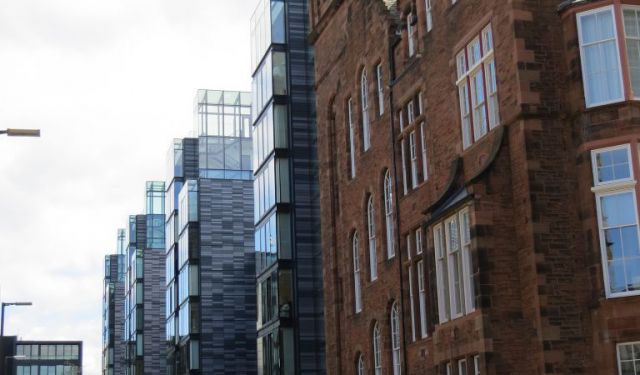 Image by alljengi on Flickr under Creative Commons License.

Quartermile is one of the most exciting new destinations in Edinburgh. It occupies the former Royal Infirmary of Edinburgh site, which was established in 1729. Today, it is a stunning mixed use redevelopment area designed by leading architects, Foster and Partners. There are luxurious residential apartments including new buildings and conversions from existing hospital buildings, offices, affordable housing and leisure and retail spaces. The 8-hectare (20-acre) site also encompasses nine listed buildings and is situated in a part of central Edinburgh that has been designated a World Heritage Site by UNESCO.

Tour the area and admire its spectacular architectural features, including a mixture of glass buildings with older buildings that were constructed from ancient stone. Great care was taken to combine the modern with the old. This regeneration scheme has won numerous awards over the years, including Scottish Home Awards City Apartment of the Year and the Scottish Property Awards – Mixed-use development of the year. One of the standout features of Quartermile is the views it affords of the Meadows. This is the large and lovely expanse of greenery to the south of Edinburgh's Old Town.
How it works: A discovery walk features a route using which you can explore a popular city neighborhood on your own. This walk, along with other self-guided walks in over 1,000 cities, can be found on the app "GPSmyCity: Walks in 1K+ Cities" which can be downloaded from iTunes App Store or Google Play to your mobile phone or tablet. The app's built-in GPS navigation functions allow following this walk route with ease. The app works both online and offline, so no data plan is needed when traveling abroad.

2) Quartermile, The Royal Infirmary of Edinburgh