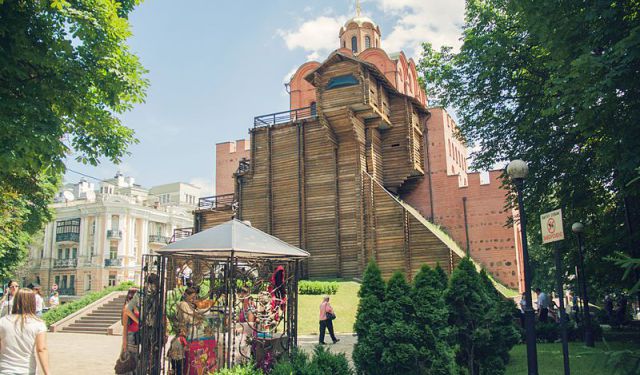 With a skyline dotted with gleaming cupolas and streets lined with centuries-old buildings, Old Kiev fascinates with its history and architecture. This historical neighborhood is considered to be the spiritual center of Kiev and within its boundaries are some of the most beautiful cathedrals the world has ever seen.

St. Michael's Golden-Domed Monastery is simply spectacular, a Byzantine and Baroque masterpiece with several large gilded domes. The original building on this site was constructed in the 12th century. Today's structure is a reconstruction that was finished in the year 2,000. Inside is a collection of beautiful mosaics and frescoes.

Opposite the monastery is Saint-Sophia Cathedral, construction of which started in the first half of the 11th century. It is the oldest cathedral in the city and astounds with its 12 domes and lavish religious art collections inside.

There is lots more historic architecture to discover in Old Kiev. Walk down Yaroslaviv Val Street, lined with old tenement homes that were built in the late 19th and early 20th centuries. Today, you will find it the home of a clutch of good restaurants, pubs and cafés. Stop by Mykhailivska Street, one of the city's most ancient streets and go to the Golden Gate, a fortified city gate from the 11th century.
Image Courtesy of Juanedc.
How it works: A discovery walk features a route using which you can explore a popular city neighborhood on your own. This walk, along with other self-guided walks in over 1,000 cities, can be found on the app "GPSmyCity: Walks in 1K+ Cities" which can be downloaded from iTunes App Store or Google Play to your mobile phone or tablet. The app's built-in GPS navigation functions allow following this walk route with ease. The app works both online and offline, so no data plan is needed when traveling abroad.