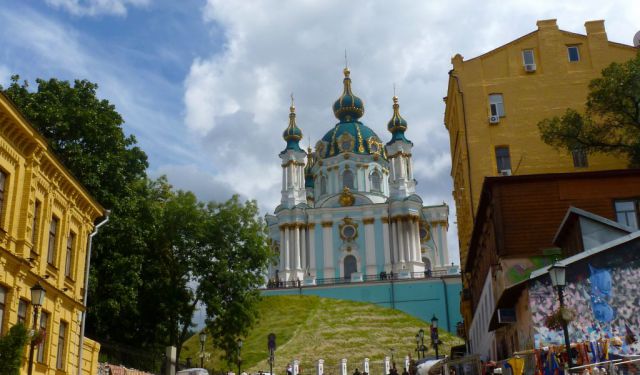 Kiev is a city rich in history, much of which started in Podil. This is its oldest neighborhood, a place where the city's trade, commerce and industry were born and where the narrow streets are filled with old buildings, temples and courtyards.

Tour Andriyivskyy Descent, one of the oldest streets in Eastern Europe, described as the "Montmartre of Kiev". A visit here is like strolling through the most fascinating open-air museum, where every footstep leads you to another intriguing building or piece of history. Over the years, prominent writers, sculptors, painters and scientists have called this place home. Along the way, you will come across several galleries, craft shops, theaters, museums and cafés. Here you will find the early home of Kiev-born Russian writer Mikhail Bulgakov, which is now the Bulgakov Museum, dedicated to his life and work.

Spend some time in Kontraktova Square, the oldest square in the city and where nearly every building is of historic or architectural significance, or both. Among them are the National University of Kyiv-Mohyla Academy and the Church of Bogoroditsa Pirogoscha, the oldest church in Kiev. Other architectural highlights include the Baroque wonder that is St. Andrew's Church and Saint Nicholas Church on the banks of the Dnieper River.

On the weekends, walk along Sagaidachnogo Street. During this time it is closed to traffic, and many locals come here to promenade. For a fun thing to do while you are in the area, take the Kiev Funicular. This railway links Podil with the Upper Town (City Center).
Image Courtesy of Flickr and Erik Cleves Kristensen.
How it works: A discovery walk features a route using which you can explore a popular city neighborhood on your own. This walk, along with other self-guided walks in over 1,000 cities, can be found on the app "GPSmyCity: Walks in 1K+ Cities" which can be downloaded from iTunes App Store or Google Play to your mobile phone or tablet. The app's built-in GPS navigation functions allow following this walk route with ease. The app works both online and offline, so no data plan is needed when traveling abroad.