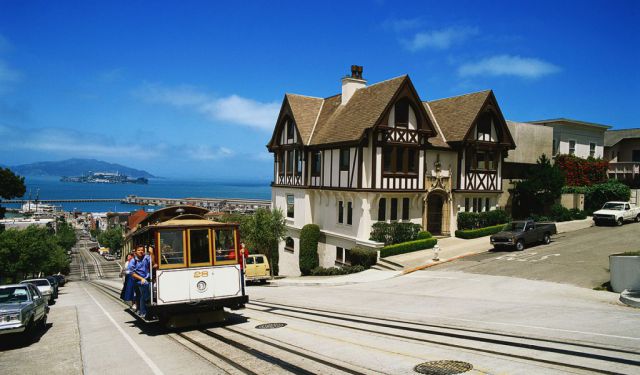 Image by Smart Destinations on Flickr under Creative Commons License.

Russian Hill is named after one of the city's hills and is a gorgeous looking area that is central to most of San Francisco’s famous locations. Yet even so, it feels a world apart and tucked away. This old neighborhood originated in the Gold Rush era of the middle of the 19th century. Settlers discovered several gravestones at the top of the hill, under which lay Russian men, hence the neighborhood's name. The identity of the deceased was never worked out.

There is a delightful feel of old San Francisco about the Russian Hill neighborhood with its hidden stairways and cable cars. In fact, a ride on a colorful cable car is one of the must-do activities when you are in this part of the city. Climb up the steep roads of this genteel area. The slight burning sensation that you may experience in the muscles of your legs is more than compensated for by the wonderful views.

Russian Hill's most famous street is Lombard Street. Its numerous sharp turns have earned it the sobriquet of "the crookedest street in the world". On Hyde Street between Jackson and Union Streets, peruse the wares of the French-influenced gift and home décor shops. As you tour Russian Hill and climb up its gradients, stop for refreshments in a comfortable local café, bar or restaurant.
How it works: A discovery walk features a route using which you can explore a popular city neighborhood on your own. This walk, along with other self-guided walks in over 1,000 cities, can be found on the app "GPSmyCity: Walks in 1K+ Cities" which can be downloaded from iTunes App Store or Google Play to your mobile phone or tablet. The app's built-in GPS navigation functions allow following this walk route with ease. The app works both online and offline, so no data plan is needed when traveling abroad.