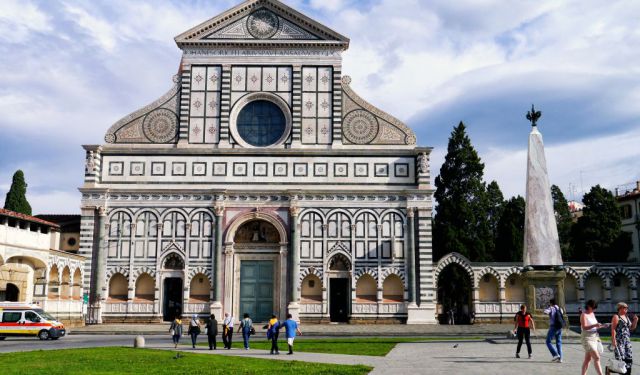 Embark on a mesmerizing history tour when you visit the Santa Maria Novella district, one of the most historical districts in the city. A tour of the area will take you to ancient churches, historic buildings and a number of elegant boutiques.

Step inside the church of Santa Maria Novella, a Gothic building that was started toward the end of the 13th century. The layout of the vast interior is believed to be the work of Brunelleschi, the architect of the Duomo's cupola. Take your time browsing the many fabulous works of art, including the Crucifix by Giotto which hangs in the central nave and the stunning frescoes in the Strozzi Chapel. Other standout works are a 15th-century wooden crucifix by Brunelleschi, and the Tornabuoni Chapel which features frescoes by the artistic school where Michelangelo was apprenticed.

Visit Piazza della Stazione, one of the largest squares in the city. Take your pick of the many fine restaurants that line the streets here. The choice includes traditional Italian and ethnic eateries. Lovers of fascinating architecture won't want to miss out on a visit to the Fortezza da Basso. This 16-century defensive stronghold is an example of military Renaissance architecture and features restored historic palaces. Today, the complex hosts festivals, concerts and exhibitions.
Image Courtesy of Flickr and Groume.
How it works: A discovery walk features a route using which you can explore a popular city neighborhood on your own. This walk, along with other self-guided walks in over 1,000 cities, can be found on the app "GPSmyCity: Walks in 1K+ Cities" which can be downloaded from iTunes App Store or Google Play to your mobile phone or tablet. The app's built-in GPS navigation functions allow following this walk route with ease. The app works both online and offline, so no data plan is needed when traveling abroad.

Image Courtesy of Nature And.