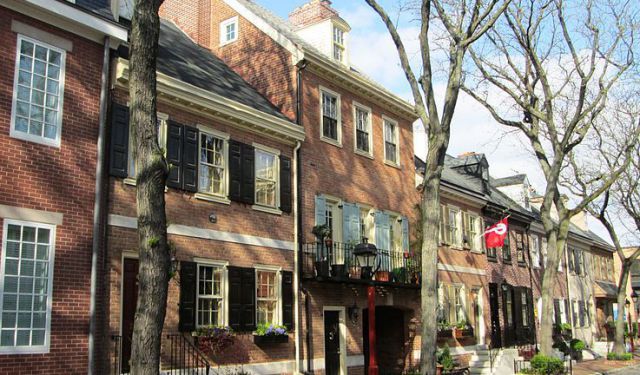 Image by Beyond My Ken on Wikimedia under Creative Commons License.

Society Hill has been through some difficult times in its history. In the early 20th century it looked like it was all over for a once glorious area, because it was in decline. However, since that time the neighborhood has picked itself up, dusted itself off and is a shining example of urban renewal while staying true to the past.

Today, Society Hill is one of the most attractive and delightful parts of the city. It has the largest concentration of original 18th-century and early 19th-century architecture of anywhere in the United States. Amble down cobblestone streets and as you go, pause to appreciate the Federal and Georgian-style brick row houses. These historic properties are not museums, but beautiful and functioning residences that are lived in by Philadelphians.

In addition to the old homes, the district features a clutch of other historic buildings, including the Society Hill Synagogue, which was originally constructed as a Baptist Church in 1829. There is also St. Peter's Church, an 18th-century place of worship with a six-story tower. With its historic charm, architectural beauty, genteel vibe and social diversity, Society Hill is a wonderful place to live and work, and also to visit, even if only to enjoy a few peaceful moments.
How it works: A discovery walk features a route using which you can explore a popular city neighborhood on your own. This walk, along with other self-guided walks in over 1,000 cities, can be found on the app "GPSmyCity: Walks in 1K+ Cities" which can be downloaded from iTunes App Store or Google Play to your mobile phone or tablet. The app's built-in GPS navigation functions allow following this walk route with ease. The app works both online and offline, so no data plan is needed when traveling abroad.