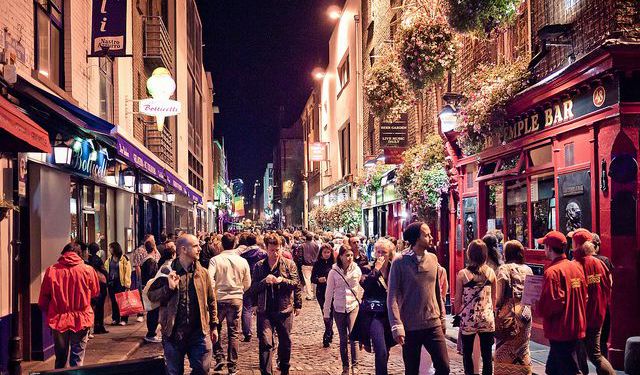 Situated on the south bank of the River Liffey in central Dublin is Temple Bar, one of the oldest parts of the city. This attractive area of narrow cobbled streets and old brick houses is known for its bohemian vibe and friendly atmosphere. This is a place where you can experience the delights of Irish culture.

Since medieval times, Temple Bar has always been a key focal point of the city, and today it attracts large crowds to its art galleries, studios, theaters and other performance venues. Among the cultural institutions to put on your to-do list are the Irish Photography Center, Temple Bar Gallery and Studio and the Project Arts Center. Here you can watch dance, theater and musical performances.

The area has also become something of a top nighttime destination. Not only for the performance spaces, but also for the many restaurants serving traditional and ethnic cuisines. There are also pubs and other nightlife venues, the most famous being the Temple Bar Pub. This popular watering hole has been serving thirsty customers for more than 160 years and gave the area its name. There is also great live music at the venue which has been recognized by being the winner of the Irish Music Pub of the Year for 2002 to 2012.
Image Courtesy of Flickr and daspunkt.
How it works: A discovery walk features a route using which you can explore a popular city neighborhood on your own. This walk, along with other self-guided walks in over 1,000 cities, can be found on the app "GPSmyCity: Walks in 1K+ Cities" which can be downloaded from iTunes App Store or Google Play to your mobile phone or tablet. The app's built-in GPS navigation functions allow following this walk route with ease. The app works both online and offline, so no data plan is needed when traveling abroad.