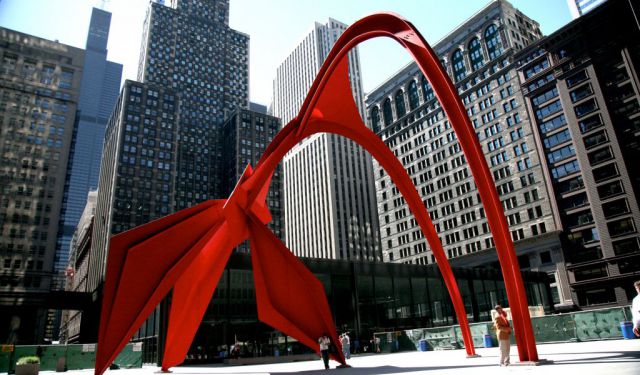 In the heart of downtown Chicago is the central business district, known as the Loop. Historic buildings and tall, gleaming skyscrapers dominate the streets and the skyline, and the best way to see it all is on foot.

In addition to being the powerbase of Chicago's government, the Loop is also known as an area of architectural brilliance and creativity. Walk down LaSalle Street, the city's financial district, which has been nicknamed "The Canyon" because of the tall, steep buildings at both ends of the narrow street. When you get to Daley Plaza, go over and inspect the beautiful but untitled Pablo Picasso sculpture. It was a gift to the city from the artist, who waived his fee. The square is named after controversial former mayor Richard Joseph Daley.

At the Federal Plaza, look up at another prominent sculpture, Calder's Flamingo. This is a 53-foot (16-meter) free-standing abstract sculpture by American artist Alexander Calder. The Loop also hosts a prominent cultural body, the Art Institute of Chicago. Examine the vast collection, which features the work of hundreds of artists in different mediums, such as photographs, sculptures, videos and textiles. There is American art, Asian art, Old Masters, European and American decorative arts and more.
Image Courtesy of Flickr and (vincent desjardins).
How it works: A discovery walk features a route using which you can explore a popular city neighborhood on your own. This walk, along with other self-guided walks in over 1,000 cities, can be found on the app "GPSmyCity: Walks in 1K+ Cities" which can be downloaded from iTunes App Store or Google Play to your mobile phone or tablet. The app's built-in GPS navigation functions allow following this walk route with ease. The app works both online and offline, so no data plan is needed when traveling abroad.