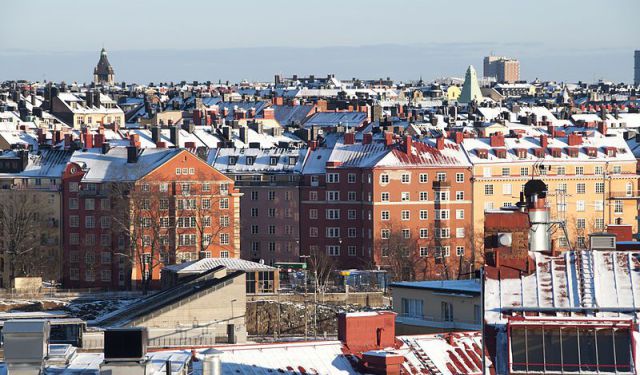 Vasastan is a charming neighborhood where you can experience the life of a local in its many restaurants, bars, cafés, galleries and unique shops. This chilled out neighborhood has a warm and friendly atmosphere that instantly makes you feel at home. One of the many great things about Vasastan is that you can dine in great restaurants and drink in popular bars without paying the high prices of the city center. Take your time walking through Vasastan's streets and let them seduce you with their attractive sights. The area is also known as the "stone city" because it was originally built up of stone houses.

However, today you will see lots of pastel-colored buildings. One of the architectural highlights is the Gustaf Vasa kyrka (Gustaf Vasa Church), founded in the early 20th century and named after King Gustav Vasa, a 16th-century monarch. The Baroque Revival style building has a large dome that rises 200-feet (60 meters) above street level. Inside there is seating for up to 1,500 people, while the funeral chapel in the basement has room for 35,000 urns. When you simply want to relax, head for one of the area's attractive parks. A popular green space is Vasaparken, mentioned in many stories by children's book writer Astrid Lindgren, who lived nearby.
Image Courtesy of Wikimedia and I99pema.
How it works: A discovery walk features a route using which you can explore a popular city neighborhood on your own. This walk, along with other self-guided walks in over 1,000 cities, can be found on the app "GPSmyCity: Walks in 1K+ Cities" which can be downloaded from iTunes App Store or Google Play to your mobile phone or tablet. The app's built-in GPS navigation functions allow following this walk route with ease. The app works both online and offline, so no data plan is needed when traveling abroad.